What the Heck is Mecha Anime? 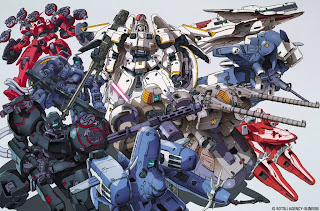 Since I was asked to post about my favorite mecha anime, (previously: the post in which I refer to it as Mech-anime), I figured I should look up what mecha anime is and share it with you!

Here at Squeefinity we like to keep learning and pass our learning on to you, our dear readers!

"Mecha anime cover all series that revolve around the use of piloted robotic armors in battle, which is broken down into two subcategories of Super Robot and Real Robot. Mecha series cover a wide variety of genres from comedy to drama, though are always fantastical and larger-than-life in nature and feature large-scale battles and/or action sequences. Mecha anime has contributed to a greater popularity of mecha and has expanded into other media, with manga and video game adaptations, and has also contributed to the popularity of scale model robots."

So, it has to do with robots. I LOVE Robots. What's not to love about Robots?


Unless this is the robot you are talking about.

Ew. For some reason it reminds me of Lord Voldemort's nascent reincarnate stage. Yuck.
Posted by William Shakespeare

I am telling you AGAIN, you will LOVE, LOVE, LOVE Gurren Lagann. I pinky swear you.

What is the name of this anima

Ive seen it. It was good