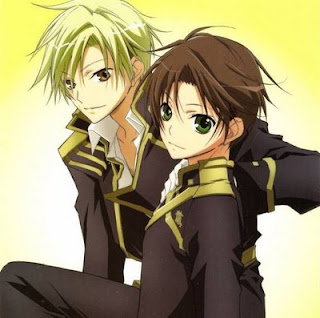 Spell battlers! Wind! Battle Academy! Weird Churchy Shit! This anime has it all.

Teito Klein is a former slave who was enrolled in a military academy because it was discovered he possesses great powers. He has one friend: Mikage, who on the night before their final exam, he swears an oath to. An orphan, Teito can't remember his family, not outright -- he has amnesia and the past comes to him in bits and pieces and dreams and nightmares.

Mikage is a good friend, and they make a good team, sparring with one another, using the Zaiphon power they can both wield. The other kids at the academy are pretty dickish to Teito because he is a slave and their families are upper crusty, but Teito overcomes this by being more awesome than them.

Having made it through the final exam successfully, Teito and Mikage are getting pretty pumped to go out and be soldiers. However, everything hits a snag when a mean looking guy, Ayanami, shows up and starts rattling around a piece of wind chimey jewelry.

Teito has some kind of mental break when he hears the sound, and some of his memories suddenly return. He clearly remembers Ayanami killed his father who seems to be a priest of some kind. Overcome with anger, Teito attacks Ayanami on the spot. He is stopped by Ayanami's posse who put some shackles on him and drag him down to the dungeon for torture time.

Meanwhile, Mikage notices his best buddy is missing and goes looking for him. He finds him in the dungeon presiding over a whole bunch of beat up guards and getting ready to make his escape. Having commandeered some kind of fighter jet, Mikage helps Teito escape. At the last second, Teito pretends that Mikage is a hostage, drawing a knife on him in front of a guard that finds him.

He gets on the jet and takes off towards adventure.

And, that's just the first episode. I have to say, I like it so far. I felt strongly for the characters from the get go. It looks like a story where the plot will take a while to unfold. There's some real drama here.
Posted by William Shakespeare