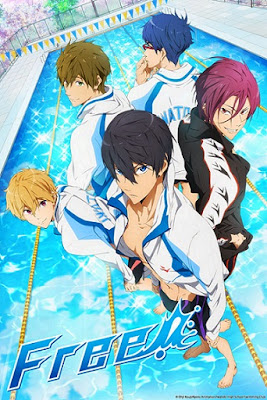 The story of the Iwatobi Swim Club centers around 17 year old Haruka, an introverted young man who seems to be uncomfortable everywhere except in the water. He lives alone (his parents conveniently absent in typical anime fashion...the excuse this time is that they moved for work), skips school on a regular basis, and seems to be disinterested in what's happening around him, at least on the surface.

In the past Haruka was part of a swim team, swimming (as he repeatedly tells us, only "freestyle") in races and relays. He and his three friends, annoyingly chipper and bubbly Nagisa, responsible and encouraging Mako, and competitive and determined Rin, won their middle-school relays, and then parted ways. Rin went on to train in Australia to be an Olympic swimmer, and Nagisa followed his family to another school. Leaving only Mako to tend to Haruka's swimming-related OCDs.  Haru, never interested in the idea of the "race," quit when Rin left, and Mako followed, one by one the team fell apart, and a few years later the swim club itself closed. The story opens with Nagisa transferring into the high-school Haru and Mako attend. In a fit of nostalgia (and brandishing packets of salt to ward away ghosts), the trio decides to break into their old swim club and take a trip down memory lane. While there they run, coincidentally, into Rin, who has returned to attend an private school with an elite swim team, still working towards his Olympic goals.

Inspired by the past, Nagisa convinces Haru and Mako to join him in starting a swim club at their new high-school. and expected shirtless hi-jinx ensue as they gain an extra member in the form of neurotic, perfectionist (and poor swimmer) Rei. And with Rin's little sister as team manager the group tries their best to make a good showing at their first meet.

This is a show I would continue. I am six episodes into the series, and in some ways this is a predictable male-harem type anime...there's a guy for every girl here. You like brooding dark and aggressive ..well, this anime has that covered. Stoic with a hidden tenderness...oh, yeah, we got that. Cute and flirty...sure. Awkward genius in glasses who happens to have an incredible body...yup. Responsible big brother type who wears his heart on his sleeve...not a problem. So, why watch it if it's so predictable? Well, hot-anime-shirtless-ridiculousness aside (I think the "swim club" choice was seriously influenced by the amount of skin the scenario offers), this is a very interesting character study.

Haru, the main character, has an icy personalty that is a little off-putting, but his genuine passion for swimming at points borders on the metaphorical and philosophical. Despite his sometimes apathetic stance, there are hints that there are deep conflicting emotions at work in this character. Except when he is swimming (and is at his most joyous) he seems devastatingly sad. Most obviously this deep sorrow emerges in his relationship to Rin. Haru's unresolved, and contradictory, feelings of friendship, devotion, guilt, and loss become a major undercurrent to the series, at least so far. There's an interesting dynamic between Haru and Rin. The one-sided competition Rin feels keeps him motivated, but causes an widening rift between two people who seem to not only admire and respect one another, but care deeply for one another (in a heterosexual way; don't get excited yaoi-fans). Each of them clings to the friendship that they formed in the past, but each wants to move past that loss, or even through it...as both characters say in separate situations "I want to move on." Their past, and their competition with one another, is not allowing them to do that.

Each of the characters seems to have some sadness or loss that they are attempting to move past, and as a team they may be able to mend one another's broken bits. I'm looking forward to future episodes. I can already hear (this series just began in Japan less than two months ago) the sound of fan-girls squeeing over this series. I would expect that there are fan-sites, fiction, art, etc. popping up every hour. This is the kind of anime a teen-girl would like, but...and we need a but here, it does have more than just cute/sweet situations, shirtless boys, and awkward affection. There's a story here about loss and redemption, about individual goals and our desire for collective support, and about how passion and freedom are strange bedfellows (one ties us down while the other liberates us). It's surprisingly deep stuff for an anime with an average of ten shirtless minutes per 22 minute episode AND one of the worst closing credit sequences I have ever experienced (you were warned). Other than those closing credits, I think this one is worth a watch. At the very least you'll be on the popularity bus before this turns into the next Ouran High School Host Club.
Posted by Dr. M

It's already absurdly popular on Tumblr

I only found out about the Tumblr link after the post. It seems that there was already something in the works, but that the teaser for hot-dudes-in-tiny-suits sort of blew up on the Tumblr, so they fast-forwarded the series.

I suppose I should now correct my claims of fan-girl-precognition, since it seems I am post-psychic...it is a pretty shitty supernatural gift to know things that already happened.

i had a grand laugh at how you explained the characters and who they are, i thought you were going to say thier names. that was a better apprach you gave though.