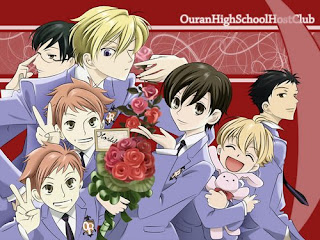 I'm re-watching Ouran High School Host Club, for the first time since it came out in Japan. I guess that was like three years or so ago, when I lived in Michigan and M lived there, too. Every week she would come over, and we would gather around my stolen internet and watch fresh fan subs. We were so rabid for this show that we would sometimes watch it in Japanese and then find some blog or another with breakdowns and screencaps. We would both freak out if our favorite fansubbers were quiet for a while. We could not live without the antics of Tamaki, Haruhi and the rest of the club. From episode ichiban, I put this in the best of the best anime catagory. It is a great, thoughtful comedy with some sad moments peppered in.

So, why am I writing about it now? Hrm. Well, I haven't updated in a while! And, I've been rewatching the show, this time, in Japanese without subtitles, and I'm catching a lot! That's not to say I know much at all. But, there are times when I'm kind of dinking around with something else and this is on in the background and I realize, Oh, I just understood that whole conversation.

The show has a ton of words and phrases that any beginning Japanese student can pick up on pretty easily. So, I'm reccomending it for the learners in our audience (of one or two...it's lonely here at Squeefinity!).

Seriously, though, this is a great story and full, full, full of laughs. With so many cute bishounen it's made for fangirls. But, hah, it is a show that KNOWS it is made for fangirls, and it takes every opportunity to break down that wall. Large portions of episodes are devoted to showing how stereotypes feed fantasy. The boys know their roles and they play them well.

Yet, the show itself is unique and lovely.

I know I'm not really sharing any details here. I think because it's just better watched. JUST WATCH IT.

M. I think, loves the Manga. I'm not such a fan. I think it's too hyper, and goes on for too long, but I'm sure she can speak to that.

Ouran High School Host Club is not only adorable, more complicated than one might expect (it hits on some very profound psychological and emotional issues in very subtle ways), and worthy of watching/reading, it's also very dear to my heart in a very specific way. Ms. Shakespeare and I bonded over the anime of Ouran High School Host Club; as soon as the fanslation of Ouran hit Youtube one of us would call...our voices full of squee! It was usually a Thursday afternoon, when the dedicated fansubbers of the world appeased our growing desire for the SNAFUs of Ouran High School's wealthy harem of charming young men (and one girl in disguise). I have never seen such dedication and speed in translation; Ouran ran very late on Tuesday nights in Japan, and by Thursday (with some exceptions) we would usually have a fresh episode to watch...just a few days after our squee-filled Japanese peers. When Ouran went live we ran home after school/work met at Ms. Shakespeare's house and huddled around the small, laptop monitor...nearly bouncing out of our chairs at the kitchen table. We chain smoked (something we have both ceased to do), drank diet sodas, and paused often to comment on what was happening on the screen, as the sun went down over our oddly eclectic Michigan neighborhood. When Ouran ended, we cried (we cry a lot), and squeed (we squee a lot) and praised Bisco Hatori for her utter cuteness while lamenting that this was the end of our love affair with the characters who populated the 3rd Music room of Ouran High School.

Ouran was our obession for twenty-six episodes. When the series ended, I started in on the manga, ongoing in Japan and in it's 11th issue in the U.S. I'm a big fan of both versions of the story (and they are very different), but I'm focused more on the manga version right now, because it allows me a little more time and depth with the characters I love. Ms. Shakespeare is a big fan of the anime version, because it has a very tight and effective story arc and seems very self-contained.

I propose a debate...Ouran v. Ouran, Anime v. Manga! But first, an overview:

The series (summary from For Richer or Poorer (FROP)," an Ouran Fanclub Website, courtesy of VIS):
In this screwball romantic comedy, a poor girl at a rich kids' school ends up working for the school's swankiest club—and gets mistaken for a boy!
One day, Haruhi, a scholarship student at exclusive Ouran High School, breaks an $80,000 vase that belongs to the "Host Club," a mysterious campus group consisting of six super-rich (and gorgeous) guys. To pay back the damages, she is forced to work for the club, and it's there that she discovers just how wealthy the boys are and how different they are from everybody else.

Essentially, the series is a gender bender/male harem situation...the main characters each represent some anime/manga-typical "type" of swoonworthy fella.

Main Characters:
Tamaki Suoh--The "king" of the host club, an over-the-top, half-French, prince character with a fragile heart of gold, who despite his intelligence and grace is actually much more of a goofball and klutz than he is debonaire.
Kyoya Ootori--The "shadow king" (or "mother") of the host club, a caluclating, determined high school student from a very wealthy and powerful family. Despite his forbidding air, he has a tender side.
Hikaru and Kaoru Hitachiin--Twin trouble makers who use their bond with one another to their advantage in order to keep their distance from other people. They see other people as "toys" and certainly tease, taunt and create mayhem, but secretly they harbor deep feelings for their friends and not just each other.
Mitsukuni Haninozuka, "Hunni"--a high-school senior whose outward cuteness ("a loli-shota") hides brains, martial arts skills, and the fact that he's actually the oldest of all of the host club members. He shares a bond with his cousin, and best friend, Takashi Morinozuka.
Takashi Morinozuka, "Mori"--the strong, silent type. He is quick to defend his friends, is very thoughtful and very emotional despite his tough outward appearance and constant silence.
Haruhi Fujioka--The bluntly honest hero/heroine of the group. She attends Ouran on scholarship, is the top of her freshman class, and is brutally oblivious to things a "normal" girl might desire or notice. She is stubborn, androgynous, practical and independant...and she's hiding the fact that she's a girl.

So, what makes this story different or interesting, it's the characters, nothing more. There are no evil aliens to defeat, there are no psychic powers, no real love story to speak of (until perhaps the later chapters of the manga)...it's a story about teenagers with obstacles, despite the opportunities their wealth, intelligence and familial power affords them. For some of these characters the obstacles are emotional; for others they are circumstantial, based on family, status, goals, and/or desires. Oddly, although this manga/anime is about a group of friends, what it discusses the most is an idea of family. Other big themes in the series center around individuality, loss, and success. The themes themselves are addressed honestly, and realistically, despite the fantasy world of wealth and priveledge in both verisons of the story.

There are some differences though between the two mediums of Ouran...and if I can get Ms. Shakespeare to agree to a debate, I'd be most pleased.

I've been pretty busy, and I've found myself on the other side of the employment red rover game that keeps getting played out in this economy. This, of course, means I have more time to watch anime!!! Sort of.
Posted by William Shakespeare No comments: