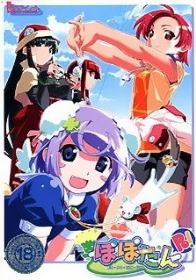 Written by: ??? No one is claiming it!
Based on the visual novel adult game by: Petit Ferrit
Directed by: Shinichiro Kimura
Produced: Shaft/Sentai Filmsorks
Release Date: July 17, 2003--October 2, 2003

I found Popotan on Amazon Prime this month and decided to watch the first episode during some down-time a few weeks ago. I debated doing a review of it because it isn't very remarkable, but finally decided that for several (paired) reasons this would be a perfect post for Ta-Ta Tuesday and we haven't had one of those in a while.

Apparently Popotan the anime is just the latest in a series of games, novels, manga and drama cds of the same name. There are a lot of variations in stories between these different mediums and retellings, but a few things stay the same. There is a moving house (that's cool), and three sisters named Ai, Mai, and Mii of various ages and degrees of weirdness. There is a stoic, perhaps roboty, maid named Mea (because those names aren't confusing enough). And there is a lot of nudity and sexual innuendo that has been heavily criticized as stereotypical, or obviously blatant appeals to male audiences who are more interested in the characters' physical appearances than their development. I have to say that on first watch...I can't see much need for the kind of nudity that is displayed. But, I don't see much need for this anime as a whole either. I found it hyperactive, confusing, and wondered (while watching) when the first episode would be over. To be fair, I feel like I should give this series a chance, but...uuuuurrrrrrggggggghhhh. I just don't care.

Here are my first impressions:
1. That is a lot of boob exposure for a show whose first episode featured middle-schoolers. Like seriously a lot of boob. I don't know that I'm comfortable with that level of boob being used in that way. I mean, yeah, it's just boobs, but...something is unsettling here. Do we really need a "whoops, someone was bathing" scene? I'm siding with the critics on this whole nudity thing...it's pointless, and gratuitous. On a side-note (about side-boob), the breasts in this series come in all shapes and sizes from "those enormous breasts should not be that perky...are they defying gravity?" to "I'm not sure of the age of this character, but I feel like we both need a adult." So...ewh.


2. Weird and perverted magical sisters who live in an eternal Christmas-house powered by dandelions that transport it through time and space! Okay, why not? It's not the dumbest thing I've ever watched/read (See: Prince of Ramen for that distinction). Of course none of it made sense in the first episode, but I'm going to assume more is revealed later about why/how this magic transporting Christmas-house works and who these strange, seemingly unrelated, boob-tacular sisters are. I am guessing time-travelling Christmas-witches.

3. The title is clever. Popotan is an inversion of the Japanese word for dandelion: Tampopo. Speaking of Tampopo, Tampopo is a favorite film in my house (it is a really good film). Popotan, sadly, will not achieve that distinction...no matter how clever the title. The world of Popotan is an alternate universe, and there's something magical going on (what? I don't know). So speaking backwards seems very appropriate in a winder-shins kind of way. Magic! WOO!

4. It is colorful and cute, when it isn't being pervy and weird. That may be 99% of the problem with this anime...it has an identity crisis!! This seems like an anime for kids in terms of art, plot, goofiness, EXCEPT for the nudity and perviness. It's like it is confused about its audience. Either go full-perv (which means I'll avoid it) or full-kid-show (which would make the most sense). This in-between thing is off-putting and creepy...like being flashed by Barney the dinosaur, or learning that Oscar the Grouch is into bondage. I don't like it.

Conclusion: Not for me, thanks. The whole things is a mess...there are some very strange choices that have been made, and I honestly cannot figure out who the audience is supposed to be.

Anime is more well known in Europe. Thus there are anime which are as of now interpreted and subtitled, for the most part by fans. 9anime.to