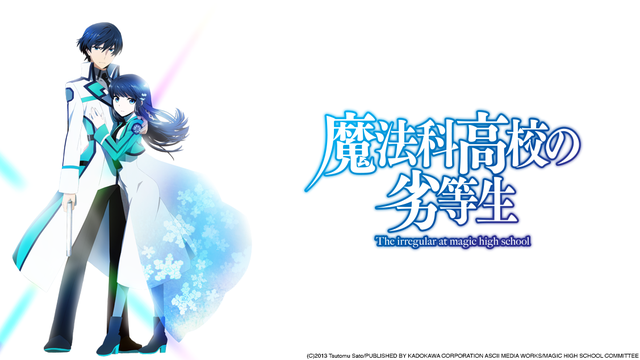 Mahouka Koukou No Rettousei, or The Irregular at Magic High School, or The Poorly Performing Student at Magical School (my favorite) is complicated as hell. It reminds me a lot of Sword Art Online, but with a lot of jargon about technical magic thrown in. Also a lot of incest. (like a lot)


But in general, it's actually one of the more likeable series I've watched recently. The characters are cute and pretty well-written. There's also a dark undertone, set up from the very first episode. Essentially, society is divided into magic-users and non-magic people. This causes a lot of strain (supposedly) and the show is based in a school that is set up to train magic users. Within the school are two classes, first and second, Blooms and Weeds, respectively. Yet again, this causes a lot of strain, this time much more visible. The main character Tatsuya is a Weed, due to a non-comprehensive testing system, while his sister Miyuki who can't keep her pants on around him (literally), is a Bloom.

The action is really excellent, if a little sparse. Again, it is really reminiscent of SAO, with generally one major action sequence or battle per episode. But that one battle tends to be pretty spectacular, and the way they animate the magic is really visually complex and satisfying.

I'm only six episodes in, but I'm already very interested to see if they delve into the outer world more and explore the dynamic between magic and non-magic people, which they've only hinted at to this point. So if you like incest-y fanservice, technical magic, and really pretty animation, go find you some Irregular. (it's on Hulu Plus, fyi)

You’ve heard of the Naruto favorite Make Out Paradise. Now comes the new