Underwater Double Post: Nati No Asukara and My Bride is a Mermaid

Okay, so today, Dear Readers, we have a double post dealing with underwater anime adventures. A fishy two-fer. A sub-surface twin-pack. An aquatic duo. A...well, they both happen underwater (and involve hijinx). UNDERWATER HIJINX!

And why shouldn't they? Japan is literally surrounded by water. Literally! (In the proper use of that word.) Japan has a long history of folklore and mythology dealing with water gods, goddesses, dragons and demons. They live and die by the sea as a constant and ever-changing reality. It brings life and death, destruction and plenty. In short, it makes sense that there would be anime dealing with underwater themes. 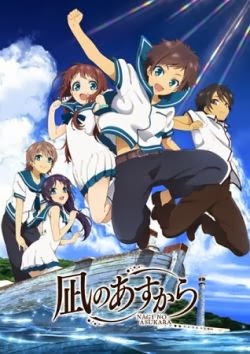 Nagi No Asukara (A Lull in the Sea)

First up, Dear Readers, are my first impressions of Nagi No Asukara, a middle-school story that just happens to take place between the surface and underwater world.

The story begins with  our underwater characters cooking their dinner. There are flames, and magical stews in magical pots that don't just dilute and drift away in the ocean currents. It all seems very surface-like. Houses, stovetops, clothing, street signs...so, how does a viewer know that Nagi No Asukara is underwater? Because there are fish. And in the first episode an underwater girl, named Manaka, gets caught in a net on her way to above water school. Seriously, underwater world looks JUST like the surface world only there are fish. Why do people underwater need steps? Couldn't they, say, just swim up something?


It's a good thing they provide some back story in the form of a myth. Here it goes (as retold by me):

A long time ago all people lived in the sea, but apparently they got tired of it and went to live on the land. The sea god (with awesome hair) got mad and didn't let them have any water. So, the people sacrificed maidens in a ceremony called "boatdrift" and the sea god took the maidens, humped them silly and the underwater people are their descendants. Descendants who use stairs underwater instead of swimming and have some sort of cling-wrap film skin.

Also, the local underwater lord is a pervert (with awesome hair) who can tell by smell if fish-people are ovulating and can curse people to have farting fish on their knees if they don't give in to his awesome-haired advances. Farting fish knees naturally leads to hijinx, fish on human prejudices/fetishes, and people losing the fancy fish clear coat that allows underwater people to be on the surface.

In short, and this is just my first-impression, this anime is fairly predictable despite being utterly confusing beyond belief. I predict: a love quadrangle, more human and fish-people distrust, some sort of sports competition, the pervy sea god to make cameo appearances, and just general misunderstandings. I could be wrong. Other than the underwater us v. them situation, I don't even know that there is a reason for the underwaterness of the series. I don't think this is the anime for me. 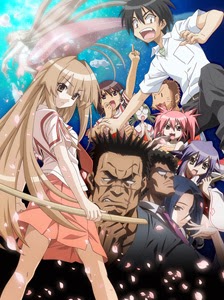 I'm a little more fond, however of the next underwater anime...My Bride is a Mermaid which is a little more inventive with it's mashing of genres. Is it a yakuza tale, a mermaid story, a sort of Romeo and Juliet or Wet-side story (HA! I PUN!)? It is all of these things.


My Bride is a Mermaid

The story begins with Nagasumi Michishio drowning in Seto bay. Passing mermaid (why not?) Sun Seto takes pity on the boy and saves him from a watery grave, but her secret is revealed. Later that night both Nagasumi and Sun learn the consequences of her actions. They must marry.

Sun's father is the head of an underwater Yakuza, the Seto Group (I told you there were yakuza). She is also her father's pride and joy. There is a law of the sea which states that there is a steep price for any mermaid whose form is revealed to a human: either the mermaid or the human MUST be executed. That is a crappy sea-law, and would have doomed Tom Hanks in Splash.


The only solution (clearly) is for Sun and Nagasumi to get married. Anime-logic! I love it! Clearly hijinx ensue, with Sun moving into Nagasumi's house and attending his school. Sun's father is furious and not only repeatedly makes attempts on Nagasumi's life he also "arranges" for the entire Seto gang to become teachers at the school they attend.


Yes, this is silly. But, it's also fun. The side-characters are hilarious and range from a strange, panty-melting ladies man named Masa (who "accidentally" gives Nagasumi his first kiss), to Shark Fujishiro (a member of the Seto gang who speaks in questions and constantly tries to eat Nagasumi), to Nagasumi's best friend Chimp (who inexplicably looks like a chimp).

The action is a little frenetic, the running gags are predictable after a while, but I still laugh. I can't handle Shark Fujishiro and crack up every time. It is a comedy for sure, but there is something sort of charming in the story nonetheless.
The relationship between Nagasumi and Sun is based, at first, on circumstance. Both attempt to make the best of it, but during their struggles a real relationship grows. They are partners in life, and come to depend on one another. It's...dare I say it...heartwarming? They are engaged, but they still seem frightened of rejection...it is clear to viewers that the two are deeply in love, and yet they miss all of the subtle (and not-so-subtle) clues. In some ways this story reminds me of other animes I love like Fruit's Basket with its never ending cast of strange characters and (less-literal) fish out of water themes. Nagasumi enters a world he was never supposed to know about, and his actions are admirable, tender, and thoughtful.

Even when sharks are trying to eat him.


Posted by Dr. M No comments: 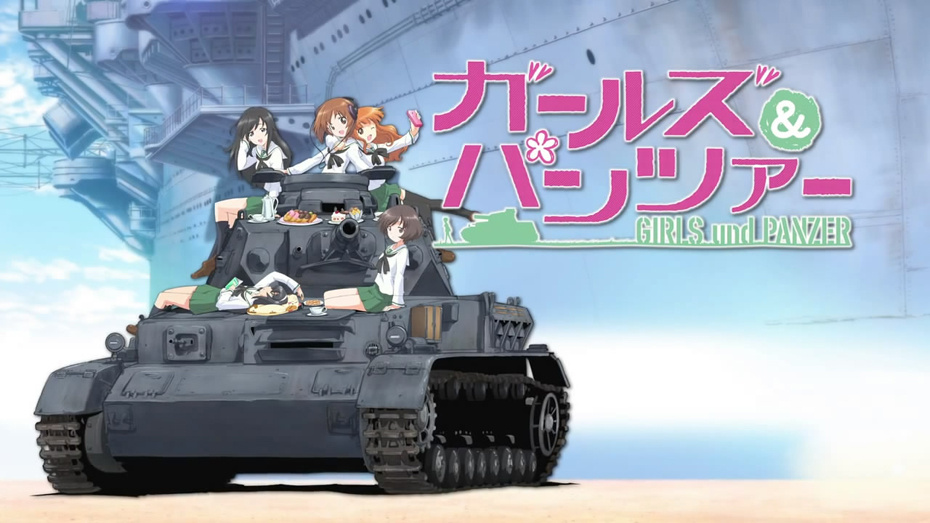 I feel like I'm pretty liberal when it comes to anime. I have a high tolerance for bizarre things, for dumb storylines, nonsensical dialogue, flat characters.

But then we come to Girls Und Panzer, which translates to Girls and Tanks. Just, just sit there, read that title, and think about it for a minute. Girls And Tanks. Girls. Tanks. And.

I have no idea who this series is for. The girls are really cute and there's a lot of girly stuff and girly jokes and that's all good and well for a show that's for young girls. BUT there's that "and" which leads to tanks which is just so freaking random. Basically, the girls are all driving tanks as some sort of after-school activity??? What the hell??? Did anyone who made this show know how much a tank costs?????? What the hell kind of school can afford a half-dozen tanks???? WAIT A MINUTE, they just made me forget how frickin' crazy it is that TANKS ARE AN AFTERSCHOOL ACTIVITY in the first damn place. There's this really bizarre sequence where they watch a propaganda tape about how these tank games are the best thing for women! Men don't like women that don't drive tanks! ???????? what?????? Who made this show? What tank fetishist got his hands on a production license? Who is a tank fetishist??? Why? Also, if they are a tank fetishist, why throw all these random little girls on the tanks? And why make them spout off random tank minutiae? Wouldn't you just want to glare lustfully at old World War footage on the History channel???

I literally don't think there are enough question marks in the world to express my confusion at this series. I have no idea who it could be possibly be for. I don't really understand what it's about it. I can only hope that someone, somewhere, is getting their jollies from it. If not, I don't think there's any hope left for mankind.
Posted by Mr. Empty No comments:

Buddy Complex : Complex, Not Many Buddies?

Just having recently downloaded the first episode of BC, the only one available at the moment, I have a whole bunch of questions and no real answers. Some of these may be due to terrible subs on my version of it, but I'm guessing it's just kind of confusing.  It appears to be an anime about slice-of-life Japanese high school kiddos, the main character a floppy-haired boy named Aoba. He's starting high school (maybe) and there's a cute girl with black hair that blushes constantly and stalks the shit out of him. Adorable. (His name makes me think of the baobab tree)

*announcer voice* BUT WAIT, THERE'S MORE. Not only is it a slice of life, but also...MECHA!!! Mecha everywhere. Literally. From the sky...under the ground...mecha mecha come out whereever you are.
*announcer voice* BUT WAIT, THERE'S MORE. Apparently one of the mecha, and some characters, have traveled through a wormhole and time travel is possible!!! Wow, it's turned into some kind of Terminator-cum-Gundam thing with awkward high school stuff going on. Surely that's plenty, right? Surely we don't need yet another facet on this diamond of a PILOT EPISODE.

*tired announcer voice* BUT WAIT, APPARENTLY THERE'S EVEN MORE. To wrap up the whole episode, they go through the damn wormhole they came in, except this time the future people drag the protagonist with them, and he wakes up in some new mecha in the midst of a massive firefight, looking for Dio. Why is he looking for a dead rock singer who tried to fill the massive, heroin-splattered shoes of Ozzy and ended up just singing Holy Diver? Why would you make such a complicated episode for a pilot? Why are Japanese sweeps in the dead of freaking winter? Why can't I find torrents with quality subs? I don't know if Buddy Complex will answer these questions, but we can only pray and watch.

Posted by Mr. Empty No comments: