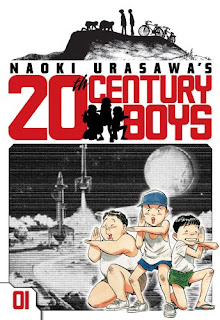 The truth is, I'd be hard pressed to not like a comic that begins with the protagonist hijacking the lunchtime music at his junior high to play T.Rex's 20th Century Boys:

"I wanted something to change, something...For the first time, rock music shook the halls of No. 4 Junior High," the protagonist says. "Nothing changed at all..."

Written by the master, Naoki Urasawa, the creator of "Monster" and "Pluto" among others, 20th Century Boys has won a ton of awards. Licensed by Viz, the manga is somewhere around #17 in the US. After reading the first volume, I just keep thinking 1) How do I get Naoki Urasawa to marry me? and 2) How can I afford to get my hands on the entire run? Because, this is a comic I do want to own. And, you'll want to own it, too.

Oddly enough, I'm reminded a bit of The Watchmen when I read this. There's no similarity, just a feeling, a kind of sadness that comes with being alive. 20th Century Boys is a science fiction mystery based around a group of kids who were school friends in 1969. They had a secret hangout and a symbol that signified their need to become heroes, to rise up and protect what's worth protecting. They're little boys, and they believe and feel with that naive childlike passion -- Then they grow up and become obscure, mediocre salary men, science teachers and convenience story clerks.

Kenji, the main protagonist always wanted to be a rock 'n' roll musician, but he doesn't have the luck or drive or ambition. He ends up running a convenience store and raising the child his sister has abandoned. When a mysterious disappearance occurs and a childhood buddy, Donkey, inexplicably kills himself, Kenji begins to notice a pattern. The symbol he and his friends created as kids keeps showing up, and he realizes there is something more going on than mere coincidence.

What I like about this manga is the depiction of the boys as children, a nostalgic, without being sappy, exploration of their memories. I like the contrast between their childhoods and their adult lives, the slightly bittersweet, but "this is how life is" motion of the work that feels very real. Even if it didn't evolve into a mystery or have any speculative elements, 20th Century Boys would make a great "slice of life" story. However, it's got more teeth than that.

There's something strange happening, a cult coming to power, allusions to giant robots, people meeting untimely fates, and I want to keep reading. So, I will. 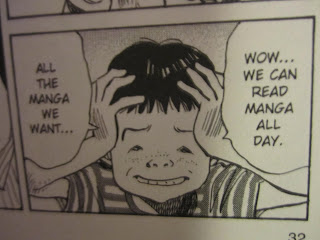 That Naoki Urasawa! So brutal! TEETH! A good way to put it! I loved Monster, which absolutely had that same Watchman-eque sadness about it as well. It might have to do with the plausibility of the story despite the surreality of some of the plot. Urasawa likes to play with the past in a very interesting way. Thanks for posting the review, I'll have this on my to-read list asap.

It really is a must read. Hey, I will prolly end up owning this series, so you can maybe pick up the manga from me when we do our trip?

Oh, how did Unwritten go over in your house?

I haven't read this, but I'm deep into Monster, which is just amazingly well-written, rivals Nabokov in my opinion for keeping me intrigued and on the edge of my seat.

@Susan and Joshua..._Monster_ is amazing, isn't it? Urasawa is so good at tension and subtlety in his analysis of human nature. And Johan Liebert is a truly terrifying character.

@Billiam Shakespeare--No news yet, It's on the bedside table, and I called dibs on the second read. I'll let you know what we both think.

Twentieth Century Boys is the best!

I can see what you meant about the story being like Watchmen: there's a mystery surrounding a member of a small, defunct group dying, and the remaining members have to unravel what is happening while suspecting that it was one of the group who committed the crime.

Also, they're both really good.