For the love of Gravitation! 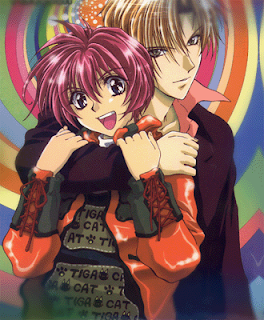 Dear Readers, I promised some Rock 'n' Roll around here! And, I mean to deliver! I've been thinking for ages about how to talk about Maki Murakami's classic many incarnated animanga-marketing extravaganza: Gravitation.

But, where do I start? Let's see, there's an anime, an OVA, a manga, a "remix" manga, light novels and oh, also dōjinshi, which Maki Murakami authored herself (and it is some really sick stuff, folks, sick.). I mean, who does that? So, meta. Actually, I think it was just so disturbing her publisher wouldn't touch it, but anyway.

At the heart of the blitz of materials that make up the Gravitation-verse, the story of a budding pop / rock star, Shuichi Shindou, and his love for a tortured romance novelist, Eri Yuki (sigh...). Shuichi, the lead singer of Bad Luck, is a little pink haired freak with too much energy, self-doubt, self-belief, passion and OCD. And, hrm, he is completely not like anyone I happen to know...

I've been thinking a lot about Shuichi lately, and why I even like him as a character? Point of truth: he can be a little annoying and abrasive, moving from the highest of heights to the lowest of lows, creatively and emotionally; he goes chibi too often for my tastes, and he is kind of pathetic. His band only has like two songs, and he wears the same outfit at every concert (oh, that's just the anime? Production value? Whatever.)

But, the thing is, I just love this character.

Shuichi is naively open to love. He sees what he wants, and he goes after it. He often agonizes and mopes, but he realizes that he shouldn't deny how he feels even if others don't approve. He's passionate about his creative life, and about the people he loves.

I'm going to go on record as saying: Shuichi Shindou inspires me!

In a forthcoming post, I will actually talk about one of the myriad associated comic type, moving picture what-have-you's that he appears in.

Synthesizer music at its best! (Remember when I played the closing song for you on my keyboard? I'm selling my keyboard...Or, Ms. Shakespeare, you can have it if you want. )