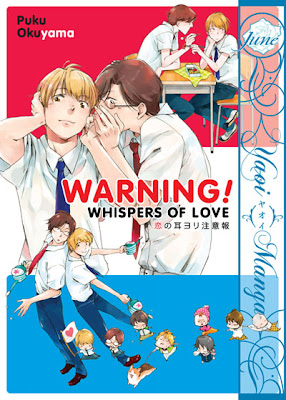 After reading the super-adorable The Rule of Standing on Tiptoe﻿ by Puku Okuyama, I was thrilled to find another of this author/illustrator's work up for review on eManga. I am a big fan of Okuyama's style, which is expressive and almost watercolory in its shading. And the plot of The Rule of Standing on Tiptoe﻿ was so sweet and understated and genuine feeling that maybe, just maybe, Dear Readers, I got my hopes up too high?

This story is a compilation collection, with four separate stories about young love. It manages to deal with younger characters without being overly creepy (for the most part). But, something about the first story arc and title piece Warning! Whispers of Love turned me off. It's not that this story segment is bad, per se...it's that it has at its heart an obsession with ear cleaning. Yeah, ear cleaning. Now before anyone attempts to instruct me on the fact that there is a very "sweet" sort of association with ear cleaning in Japan...I already know. Here's a video below of some very pretty ladies picking waxy whatnots out of the ears of paying gentlemen.

Precious! Except maybe to my admittedly western sensibilities...also, why is that guy yelling at the end? Anyone? I don't know what's going on! Ears!
﻿ ﻿

So, main character Hajime is a first year high school student, and is being persued rather vigorously by highly ranked upperclassman Eiji. Eiji just wants to clean Hajime's ears. Eiji is a little scary, and sexual innuendos abound. Okay, it's kind of cute, but the ear thing...not my cup of fetish. The other stories are better.

The second story sequence, called "My Room/Our Room" is about a guitarist named Shino who, on a whim, takes a total stranger as a roommate. Sota is upbeat college kid who ran away from home to attend school, he needs a place to stay for two weeks, and Shino takes him in. This is yaoi, so obviously the two fall in a rather timid sort of love and Sota stays on after the two weeks. It's cute and sweet, and well-drawn, but nothing that makes my stomach flip, but this sequence certainly seemed the most well-considered of the four.

The next story sequence consists of two parts entitled "Lens," and "Beyond Friendship" and focuses on one of my favorite things...two childhood friends who realize that they really love each other once they are separated. It's a little predictable, but worth a read, I suppose. There isn't really enough room or development for it too move beyond plot into anything more complex.

The last story is a little weird and seems to be about a young man who is jealous of his boyfriend's dog. Eh. Meh. Bleh. I could take it or leave it.

Overall this collection isn't bad, it just feels rushed, perhaps to the point of incompletion at times. The stories are little more than brief plot sketches and as such don't seem to be very good at capturing or maintaining my attention, regardless of how much I admire Okuyama's illustrations. It's a fast read with not much meat on its bones--nothing I'd get obsessed over.