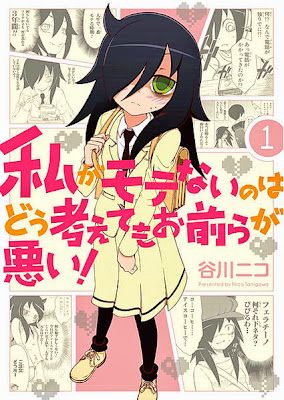 Welcome, Dear Readers, to a GUSHING review of a strange little, heartbreaking, anime with a long name. The title of this slice-of-life, teen-angst, anime series: Watashi ga Motenai no wa do Kangaetemo Omaera ga Warui! , better known by the shortened title Watamoto, translates to No Matter How I look at It, It's You Guys' Fault I'm Not Popular! and, in short (or long...considering the length of that title) that's exactly what this anime is about.

Lead character Tomoko Kuroki is a fifteen year old girl with crippling social anxiety and self-esteem problems...a fact that makes her high-school life and her desire for popularity awkward to the point of painfulness for both viewer and character. So, why would I not only want to watch something that is painful to watch, but encourage others to watch it as well? That's a good question I don't really have an straight answer to.

One thing I want to make clear though, is that I am in no way watching this to ridicule or make fun of this character. Although I have never had to face the depths of social awkwardness that Tomoko faces on a daily basis, I cannot help but feel a sort of horrific empathy with her as she moves throughout her day: panicking at each small social interaction; swinging wildly between utter disdain for her fellow students and her desire to be more like them; misjudging and misinterpreting social cues, actions, and reactions; feeling isolated and trapped in that isolation without any direction to turn; and trying madly to find some IN to a world of friends, popularity, and social ease that she seems to be excluded from. To call Tomoko simply anti-social or neurotic is to sell her short...she is a strangely compelling character, who invokes joy, sorrow, and pity in me

Fiercely independent by necessity, Tomoko TRIES (and fails) to be "normal"...something that may stick out in propriety-conscious Japan even more so than other countries. Countering that independence, though is a desperate need to fit in somewhere. Tomoko is so desperate that she negotiates every move she makes in an extensive inner-dialog that viewers are privy to...we see the misconceptions she is under, and the, at times, very sweet nature that motivates her. Of course we also see all those plans fall flat on their face, and we see a lot of her perverted and violent side as well (Tomoko is a well-rounded character). The end-goal to all her schemes is something most people take for granted...a handful of friends, a little bit of love and self-confidence, and a chance at the "normal life" those around her seem to find so easily. One issue keeping her from finding that "normal life," is that much of her understanding of what is normal and what makes a person popular is skewed as a result of her reliance on pop-culture artifacts that serve as a poor road-map; she reads countless manga and fan-magazines, plays Otome games (dating and relationship games targeted towards a mostly-female audience), and constructs elaborate fantasies.

One of the things I find most fascinating about this anime is HOW we as an audience understand Tomoko. Tomoko's inner life is elaborate (it swings from highs to lows as she attempts to navigate the real world), and her outer life is withdrawn, awkward, and stilted (she can hardly speak to others, but when she does it involves some faux-pas, oddity, or social misstep). Somewhere in the middle is the real Tomoko...an interesting and strange girl who with a little more (or less, at points) self-confidence would be a "normal" high-school student (there are no "normal" high school students). Tomoko doesn't seem to realize that she's not completely alone...that each person is a little bag of neuroses and second-guessing just filling to burst. But, unlike many of us, Tomoko has no outlet for her very contradictory thoughts and impulses.

She hates the popular kids, but she wants so desperately to be popular. Who is to blame? Tomoko herself? Yes, to a point, but who does she have to turn to? She's navigating this alone. Should we blame the popular kids for excluding her? Absolutely, but they're in some ways JUST like Tomoko, and perhaps fear letting her into their lives. She is, after all, an honestly odd person, who keeps others at well-beyond arm's length, and they most-likely have no idea how to approach her.

I love her oddity. I love the completely unaware and disastrous lapses in logic she has. I love that she tries so hard, and I feel sorrow when she fails. In some ways she's a cool kid...she has passionate interests (albeit perverted passionate interests at times); she's unique; she's imaginative--she's absolutely fascinating. She's the kind of kid we've all been at one point or the other (I hope, I'm not alone here in admitting that). She's the kind of person I'd befriend...a fellow outsider weirdo holding "normal life" at a distance while secretly desiring all of its pretty trappings.

There's a tragedy to her failed attempts that's reminiscent (I'm about to get word-nerd here, so bear with me) of Hamlet. Now, I'm not saying this is Shakespearean exactly, but the inner struggle with identity and presenting our "self" to the world, the frustration of feeling bound by circumstance and expectation...those are HEAVY human concerns, and they are addressed in this anime. If Hamlet were minus one ghost-dad, and plus a comedy-of-errors feel, Tomoko would be hamletesque.

I highly recommend this ongoing series. I have watched through episode six of Watamoto  so far, and am hooked. I will say that I don't recommend it for people who have a tendency to be overly-empathetic, or who get anxious when others are in awkward situations. There's a Michael Scott (from The Office) element to Tomoko...she means SO well, but she's so wrong at times, and misjudges so much in the world and about herself. It could be too much anxiety for some viewers, but if you can handle the elevated stress of watching this, it is well worth the risk.

I'm going to leave you with a teaser....Watamoto has some of the best opening credits I've ever seen in an anime...hard heavy-metal, Japanese-style and some nice imagery reminiscent of Tomoko's inner struggles. I might actually go purchase this song, if I can find it...wow.

All in all, I'm really loving this series...I'm loving it THROUGH the pain I sometimes feel watching it. My heart goes out to Tomoko, and I know that I'll be cheering through her victories...as soon as she manages to have one.
Posted by Dr. M