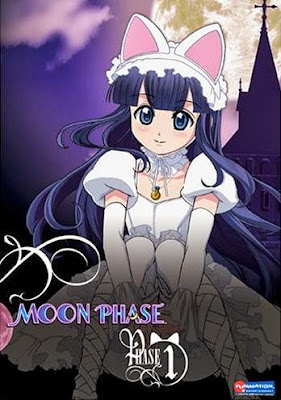 
I will admit that I have biases, and one of those biases is against hyperactive, annoying, and almost borderline personality disorder female characters in anime and manga. There are just too many of them. Way too many. It's a trope, I know, and I should be forgiving, but I imagine that if there is an anime universe out there then 75% of female characters under middle age are frighteningly neurotic and should be placed under heavy medication and or psychiatric care. The precious-looking, Lolita, cat-girl, vampire with multiple personalities pictured to the left is annoying. Now, granted, I am only 2 episodes into the series, but already I am acutely irritated by the mix of bossy, aggressive and bratty I'm picking up in the character of Hazuki/Luna (multiple personalities, remember?). And I'm already a little skeptical of the nature of the series as a whole because there is a LOT going on--not plot-wise perse, but just in total. There is too much going on in Moon Phase, and not all of it makes sense so far...who knows, maybe it all works itself out later?

Episode One: "Big Brother, Be my Slave"

In this first creepily-titled episode viewers are introduced to Kouhei an awkward and forthright ghost-photographer (That's a job? I'd like that job!) whose job is to capture psychic photos for a popular Japanese occult magazine. He also has a total inability to see or be affected by spirits (which seems like a strange issue for a ghost-photographer to have). He is travelling in Germany with his cousin Seiji, who is a gifted psychic, and the magazine's chief writer.

Now at this point there are several things already noteworthy about this anime series: 1) it has the most annoying theme-song I have heard in a good long while, 2) the associated images with the theme-song are bizarre...I mean two rabbits trying to pound Hazuki/Luna into mochi in an attempt at "cute" bizarre. What's cute about attempted mochi-slaughter?, 3) the background art is dark and atmospheric and overall very scenic and beautiful, but the characters themselves seem to be done not only by a different animator, but in a different animation style...something doesn't mesh up between the scene and the people populating that scene, 4) there are some mighty MacGuffins up in here.

A MacGuffin is a term used in film and fiction. MacGuffins are objects, goals or people desired protagonist...this desire for this MacGuffin (whatever it may be) moves the plot of a story along, but there is seldom any real motivation presented FOR the desire to viewers...it is merely fact, and is often left unexplored...as viewers we notice and accept it without much analysis of it. The classic example is from Alfred Hitchcock, who claimed that a MacGuffin in a spy story would always be the papers (what do the papers say? Who knows...that spy needs those papers.) or in a private-eye movie it could be a necklace (we need that loot, see! Why? Who cares...it's LOOT!). A MacGuffin motivates and spurs the plot, but it often becomes sort of incidental in some ways. So, say a protagonist like Hazuki/Luna desires freedom, but there's not really anything seemingly confining about her life...why does she want freedom? Well, because everyone does, right? Let's free her. Or what if her desire is to go to Japan? She lived there once (confusing spoiler), so Japan itself becomes the motivating factor...we better get her to Japan!

Okay, now that I've spoiled it for you already, I'll rewind a bit. Spiritual void Kouhei is taking pictures of a German Castle abandoned during the Black Plague, and as he is taking photos he notices a girl sitting on a parapet. The editor/writer and super-psychic Seiji get excited...they are going to that castle TONIGHT! Kouhei enters the castle alone (apparently there is some sort of psychic force-field around it that people who are not Kouhei cannot enter), and finds Hazuki/Luna who immediately tries to seduce him and starts calling him Big Brother (gross). This is when we discover that Hazuki/Luna is a) trapped by her father and his servant Vigo in the castle, and b) speaks Japanese because she lived in Japan for a while (when? the freaking castle is from the 1300s? This weird non-explanation annoys me to no end).  Kouhei is all, "sure, let's go!" but Vigo, the masked servant, stops them and gets all big-glowy, floaty-head, magic-face. Thankfully Seiji the psychic intervenes...


So there are lots of sutras flying, and crazy vines attacking people, and sobbing writers, and huge declarations and in the midst of all of this chaos Hazuki has a personality switch into Luna, a more sophisticated and aggressive version of herself. She bites him...surprise. And his blood looks like kool-aid...actual, non-sarcastic, surprise. He is now under her spell and is his slave...

We've already established that Kouhei has all the spiritual sensitivity of a shoe-horn, so it's no surprise to us that Luna's bite was supposed to change Kouhei into a slave, but failed. He is simply immune to supernatural-type stuff. So, Luna does what any Japanese vampire trapped in a German castle for 700 years might do...she throws a temper tantrum.
Eventually Kouhei (who is really dense), understands that he has to break a crystal to destroy the barrier keeping her in the castle. So he does. She disappears and the end...

Nope, she magically reappears at his home in Japan and I am sure hijinx will ensue.

Now, I do love a good supernatural, anime, exorcism comedy, but I've decided not to continue on with this series as a result of the intense annoyance I feel towards Hazuki/Luna after only two episodes, but that doesn't mean this is an anime to write-off. The premise, despite plot holes and assumptions, is interesting. The background animation is awesome. There are plenty of modern-day, fish-out-of-water, moments that will come from Hazuki/Luna's new life in Japan. So, it could be good...it just isn't for me.