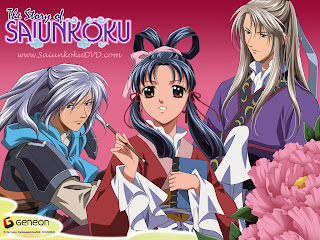 The Story of Saiunkoku is a totally squeeworthy anime.


I started following the show when it was first airing in Japan at a time when you had to wait for fansubs to come out. It takes place in a fictional medieval kingdom. Centered around Shurei Kou, the poor descendant of a noble family, who wants to be a government official despite the fact that she is a woman, the anime has enough twists and turns to keep it enjoyable despite its length. There are something like two seasons of almost forty episodes, so it's a nice, long epic adventure.


Since there were large gaps between episodes, my interest in the show waned after a time. What I can say is, it's a great show with nice art and a great male harem anime that includes just about every bishounen type know to fangirldom. Also, there is a strong and interesting female lead with a depth of character I really enjoyed.

I'm not aware of an official licensed streaming version of this right now. Its not available on Netflix, and frankly, the boxset is stupid expensive. I'd like to watch / finish this show one day, though.