I listen to a lot of dubbed anime, so I am going to modify this catagory so that I might talk a bit about bad subtitles. Bad subtitles are...bad. But, they are also really, really funny.

When I bought my copy of Gravitation, I got it for the cheaps. Little did I know that there was a reason for the bargain basement price of my copy of the series. I may, or may not, have accidentally purchased (no one sue me for this) a Hong Kong rip-off of the series. I was not aware of this until I watched it. I knew the series pretty well at this point, because Ms. Shakespeare and I had watched it together on several occasions. My copy was not like her copy. Her copy had...um...what's the opposite of word vomit? 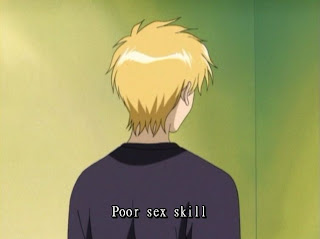 This screen capture should read, "You want a reason, maybe you're a lousy lay?"

It does not say this. It just says "Poor Sex Skill." Hahaha.

How about exhibit B? 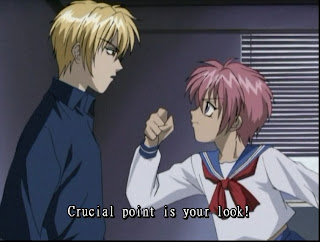 In this scene Eri Yuki (whom my version insists on calling Kwan) is trying to talk seriously about breaking up to a traumatized Shuichi (whom my version insists on calling either Showe or Showende) who has decided to renounce his masculinity (he is dressed in his sister's school uniform) in order to help Yuki save face. Shuichi says something along the lines of, "You're leaving me because I'm a man. I thought you'd like this look better." Yuki is saying something like, "How you're dressed isn't really helping your case." But it came out really weird. Poor Shuichi, he actually cross-dresses a few times in the series. 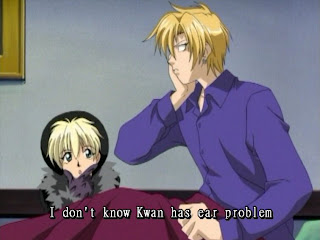 Tohma (whom my version insists on calling like 8 things...seriously, it's like they forgot what they named him) is lurking in the room and catches Shuichi kissing Yuki (see the Kwan there?) goodbye on the ear. Yuki gets a little flustered, so Tohma (whom my version believes is a "she," although I assure you he is not) says something like "Oh, Yuki, I didn't know you had an ear fetish." I suppose that could  be a "problem," but I think it is more likely just a super bad translation.


Ms. Shakespeare couldn't even watch this version with me. She made me turn it off. I think it's hilarious. So, it gets my vote for best subtitles, on account of the amount of amusement it provides me. Not because they're good. Because they really, really aren't.
Posted by Dr. M