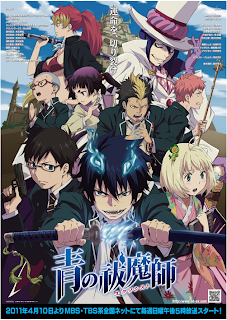 Hey, Blue Exorcist, I like you. I mean it. You are everything I like in an anime!

What is not to like about an exorcist cram school where the teenage son of Satan, a demon in human form, Rin, studies under the tutelage of his twin (younger) brother, Yukio, who just happens to already be an amazing exorcist himself? Absolutely nothing!

Though he may be the devil's spawn, Rin Okumura, plans on learning to harness his blue flame powers and demon dispelling sword, so that he can one day avenge the death of his adoptive father, a pretty bad ass priest and exorcist, Shiro Fujimoto. In order to do this he must attend exorcist cram school with a group of fellow (misfit-type) pupils.

Exorcist cram school, True Cross Academy, exists in a place called Academy Town where students can go to study anything. Rin's brother, Yukio, happens to be an instructor there, even though he is only fifteen. The chairman is a man named Mephisto Pheles (who I keep wanting to call Dr. Faustus). He's a bit off and seems to have some secret ties to the demon world. All of the students at the academy have their own special reasons for being there, mainly wanting to defeat Satan. Some have stories that will clearly emerge as time passes. Studying happens. Things ensue. Enjoyment is had.

This anime is a salty mix of high school comedy and supernatural hijinx. In some ways it reminds me of the best things I loved about Bleach in its first season. I hope Blue Exorcist doesn't lose its momentum but stays on course to remain a really fun show.

I love Rin's character. He's a sweet guy with a bit of a temper in service to the people he loves. He is not over the top angsty, though being Satan's kid, he's probably got some stuff to deal with.

Actually, I like all of the characters so far. They are all adorable, especially Shiemi, the budding tamer with her little demon familiar the infant greenman. 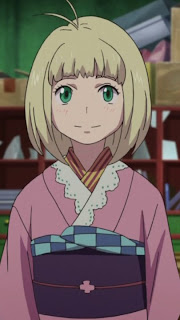 She reminds me of my little sister when she was a kid :)
Posted by William Shakespeare