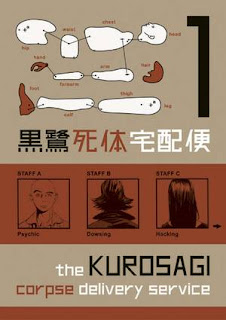 Kurosagi Corpse Delivery Service just goes to prove you can't judge a book by its cover.

When I first saw this manga, I thought, this is going to be a great read.

The cover is unique, rough stock instead of glossy, and it lacked the stereotypical windy, angsty, weapony type scene manga can have or the big-eyed, big-busomed lost looking girly-type that often graces covers. It was a stripped down cover with a graphically interesting layout. Printed in 3 colors, an uncomplicated guide to the body sits next to the volume number and above the title displayed in both English and Japanese. Below this, there are mug shots of some of the characters and the tagline: Your Body is Their Business.

The exectution of this story, however, was terrible. Open the cover, and you will find that the interesting art stops there. The drawings in this manga are subpar. The character designs feel cartoonish and not fully realized. Maybe subpar is the wrong word, and criticizing a comic for being too cartoonish is unfair, but Kurosagi Corpse Delivery Service has a kind of Scooby-Doo-esque feel to it that doesn't inspire me at all.

If the story wasn't so bad, maybe the art wouldn't matter as much. I've read plenty of manga that weren't drawn that well but were compelling enough to keep me interested. Not Kurosagi.

Basically, the members of the KCDS have these special powers. There is a guy who can talk to the dead, a guy who can dowse for bodies, a girl who learned embalming in America, a guy with a hand-puppet that channels alien voices and a computer hacker leader who is kind of buxom and always wearing her hair differently. I don't like any of these characters, so maybe that is where the comic goes wrong for me.

The characters find bodies dumped in various places and then commune with them to find out their dying wish. Once they cart the corpses around for a while, figure out what they want, and accomplish it, they get some kind of kharmic cash payoff.

Anyhoo, the stories usually involve the bodies wanting to seek revenge, reanimating and doing stuff to the evil guy who ruined their life. Also, there is some unnecessary dead body sexual overtones/necrophilia incest type stuff in the first story that was so offputting I really didn't want to read the rest of the stories in the first volume.

But, I did. They were all equally unremarkable.

Meh? I'm sure someone relates to these because they've published an awful lot of them. M, you might like them a little since they are supposed to be horror -- though I keep expecting the members of Kurosagi to run into Fred, Shaggy, Daphne, Velma and Scooby cruising down the road in the Mystery Machine -- but I could do without these in my collection. 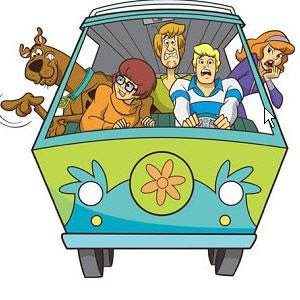