Mahou Shoujo Anime is, from what I researched, not a thing I watch. It's about magical girls? Like Sailor Moon, or something. The closest I get is maybe Ai Enma, Hellgirl, from the Hellgirl series. I am sort of confused by the definition of Mahou Shoujo, so I'm just gonna assume that this counts.

Here is my defense:
1. She's a girl.
2. She has magical hell powers.
3. She wears a school uniform that looks kinda like sailor moon's. 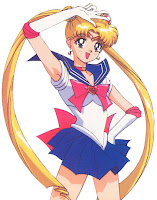 They are like Yin and Yang.
Sailor Moon is all: "Whoop! There I is!"
And Hellgirl is all:
"Pitiful shadow cloaked in darkness.
Thy action cause men pain and suffering.
Thy hollow soul drowns in thy sins.
How would you like to see what death is like?"
So, because I haven't written about Hellgirl before I'll say a few things now.
The plot of the series revolves around a reporter who is doing a story on a website called "Hell Corrospondence." The "Hell Corrospondence" site is set up for vengence. Wronged persons can send a name to the site and Ai and her assistants will carry them and their soul to hell to fullfil the grudge. The price for this service is that when the summoner dies they too will be carried into hell.  It's a lighthearted musical  romp...okay, that's just a lie. It's pretty dark and heavy stuff. The reporter, Shibata Hajime, has a lot of his own problems, and it turns out his daughter has a strange psychic link to Ai. And the psychological torture some of the cursed go through is pretty fantasticaly intense. Ai too has her backstory, which is tragic and heartbreaking. It's not a happy series, but it is beautifully animated and complex. I like complex! I like tragic! I like schoolgirls who take jerks to hell!
Whether this is actually a Mahou Shoujo? I don't know.
Here's what I got from the wikipedia: "Magical girl stories feature young girls with superhuman abilities, forced to fight evil and to protect the Earth." Well, maybe I'm waaay off base here. But this is as close as I get...so. Hmmm.
Posted by Dr. M