Day 15 - Post Which Anime Character You Wish You Could Be: Dean Winchester

Um, I haven’t even seen the anime version of Supernatural yet, but who cares. When I grow up,  I want to be Dean Winchester.

But, I guess that's sort of cheating, right? I mean, I have a sickness that makes me a fairly Dean-obsessed person. I'm getting help? (No, I'm not.)

So, I CAN pick a few alternatives, because there are plenty of other anime characters I would like to be. 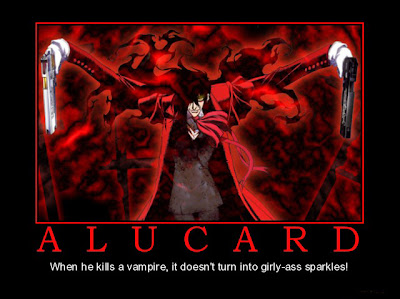 1. Alucard from Hellsing. Because he's what vampires should be--danger and style and substance. No sparkles. No mopey, woe-is-me. Just a sort of monsterous joy and fascination with life. Plus he's realy a nice guy...deep down inside. Like really deep down inside. And immortality seems to suit him. 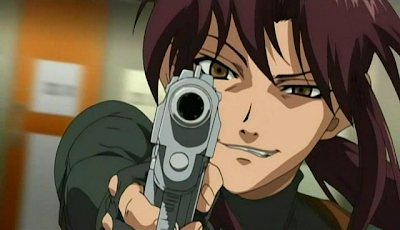 2. Revy from Black Lagoon. Yeah, her shorts are too short, she's a mercenary, and she isn't the most "honorable" person around, but she's butch as hell, and one of the most bad-ass chicks in all of anime. If I just had like 1/4 of her awesome, I would be the most bad-ass chick in town.
Most of the anime I watch is full of pretty tortured and miserable characters. I might love those characters and feel for their suffering, but I don't actually want to go through it. The above two characters are exceptions to the sort of anime-misery rule. The aren't "good guys." They aren't all sad in their skin. And, although they might be "bad," they're also pretty joyous about it. I want that kind of joy. Each has a mission, a purpose...that's enviable. They're renegades. They're, dare I say it, bad company. Hahaha! Oh, Classic Rock, you never fail to amuse me. And gun toting bad-asses, I want to be you, just a little bit.
Posted by Dr. M