Day 24 - Favorite Anime Hero or Heroine: Shuzo "Shu" Matsutani of Now and Then, Here and There 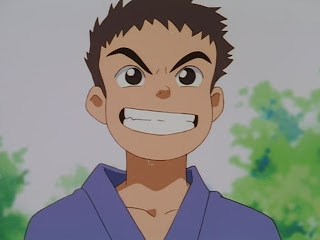 He’s not tough in a traditional way, he’s not a warrior-type, he isn’t a knight in battle, he’s human, but he’s also the epitome of heroism…really. He fights and sacrifices himself again and again to protect others, and to right the wrongs of a world that has lost its humanity in many ways. Although he is thrust into a dystopian future, beaten, and nearly destroyed, he still maintains a positive view of humanity. He believes people are, despite all evidence to the contrary, essentially good and always worthy of redemption.

Now and Then, Here and There is only a 13 episode series, but 13 episodes are plenty. This series deals with some heavy themes: war, rape, violence, greed, misery, abuse…heavy stuff. But through it all Shu’s heroism changes things. The world becomes a better place through the patient and caring devotion of one person to the people around him and the goodness he sees in those people, no matter how far they have fallen into despair or corruption. Shu redeems the world. He shows the world a better way. He’s just a young man, but he’s willing to suffer endlessly for the benefit of others.

Although I really love and admire this series for its message and its artistry (so much symbolism…beautiful stuff!), I would have to say I wouldn’t recommend it for most viewers. Although many of the characters are young, many of them children…this is NOT a kid’s show. It has a good message to share, but it is at times stomach-turning in its depictions of brutality. If you can handle the painful scenes (and they are painful, I’m not exaggerating), then this is well worth the watch, but sensitive people should be wary. For instance, Ms. Shakespeare, this might be a bit out of your comfort zone. But for those of you who can handle graphic violence and heartbreak, this is an amazing piece of anime, and Shu is hands-down the most heroic figure I can think of.