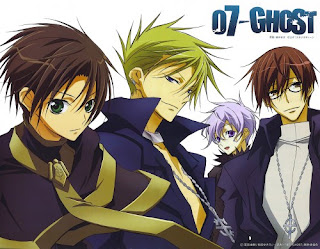 Man, I'm tired. I just watched 25 episodes of 07-Ghost. I think I have post Zaiphon battle stress disorder! What was I thinking? I wasn't! M can attest. She likes the cliffhanger, but I tend to do the marathon. I'd rather wait for a whole season to finish and then watch it all at once. Obsess much, Shakespeare? Yes. Yes, I do.

Overall, I liked 07 Ghost. Teito is adequately self-loathing and loving. He's still a kid, but he's also pretty mature, so his character has a kind of duality of depth. He's driven by the memory of the people he allowed himself to love, his father - the King of Raggs, the Father -- one of the 07-Ghosts in the guise of a bishop who raised him, and Mikage -- his dear friend from the academy.

He's a vessel for the Eye of Mikhail (I think a reference to the archangel Michael), but he's got a lot of power all on his own. He's got some pretty impressive buddies: a few gods who bum around as bishops and have sweet powers, a mermaid who plays the organ, a cute little pink winged fluffy animal thing that is the reincarnation of his lost pal, and another kid studying to be a bishop, a runaway from the Oak family.

He also has some pretty impressive enemies, namely Ayanami, who would probably be my candidate for big meany of the year. He's got a scary look. He's probably a fallen god. He likes to kill people. He also likes to take partial control of their souls and get them to do his bidding. There are a lot of villains in anime. Ayanami really gives me some creepy chills.

The story takes place mostly at the church/sanctuary in district 7. Basically, it's supposed to be a place where people can go to be safe, but these Kor keep coming in and dirtying up the place. Kor are people who have sold their souls to have wishes granted. Apparently, people do that a lot because there are a lot of Kor.

So anyway, Teito hangs out at the church for the entire series, which was kind of a bummer for me. I was hoping that the show would go somewhere. I thought he would hang out at the church for a while and then put the show on the road. That didn't happen. Most of the "journey" was emotional, and it got a little repetitive after a while. Basically, Ayanami or the empire or whoever would get all panties in a bunch about the eye of Mikhail. There would be some kind of attack on Teito. Frau and the other bishops would step in. Someone would get hurt. Teito would feel bad and want to give up or run away, but then he would gain the inner strength and fortitude to move on -- usually through the kindness of others, rinse and repeat and you have a series.

Of course, there were variations on this theme, and Teito was able to forgive himself and soften up as the season progressed. And, the very last episode, they finally left the church, but to what end? I don't know because there is no season two and the manga, which is ongoing in Japan, had a few volumes printed in English but I don't believe they are available in print anymore. Le sigh. (Yes, I know I could probably find scans of them online, but I like books, damnit.)

I'm sure part of my problem is that I do watch things in one sitting. Rather than getting weekly doses of epic, I get it all at once and I see the repetitive patterns, which are important when a story arc is spaced out, but a little bothersome when it is compressed. Also, though I really dig male harem animes, I would have liked to have seen more ladies in this besides the completely sweet little nuns and the mermaid. Teito doesn't even really acknowledge he had a mom. For him the world is strong male relationships. Buddy-ships, I guess. I would have liked to have seen the church a little less segregated gender wise, but in the end it is an anime, not some kind of diversity program.

If you're looking for a diversion, this is good. I just wish there was more. I hate stories ending without really answering any questions.
Posted by William Shakespeare

I didn't know there was an anime version. I've read the three books, though.