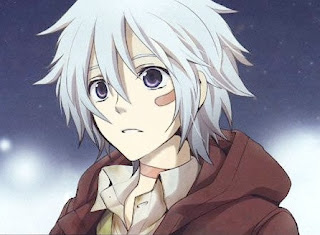 Okay, I don't plan on doing episodic breakdowns of every show I watch, but seriously, any anime that quotes Shakespeare and Oscar Wilde gets a little extra attention.

In Episode 3, Nezumi, with the help of his robotic rats, having saved Shion from the fate of a deviant within the walls of No. 6, introduces his charge to life outside them.

Shion is suffering a kind of innocent Shion-esque culture shock, not fear really, curiosity, maybe. When it starts to sink in that he won't see his mother again, he starts to have some doubts. Shion begins to exhibit signs of the scary "virus" that took down his co-worker in No. 6; he feels an infection at the back of his neck and tells Nezumi to cut it out. Nezumi does so without any anesthetic, and Shion begs to die. Nezumi convinces him he wants to live, reminding him of his mother and this girl that has been a lifelong friend.

He cuts out the infection to discover it is a pupa of some kind. Shion sleeps for three days. When he wakes up, his hair has turned white, and he has a strange spiraling scar that runs up and down the length of his body, but he is alive.

He and Nezumi discuss the killer bees, which are born from the pupa and bound to infect the inhabitants of No. 6. Nezumi wants them all to die. Shion is perplexed. This goes on a while, then Shion says he wants to know the secrets of the city. They go together to see a woman called the Dog Keeper.

Wow, well that is the breakdown. Killer bees, huh? We shall see. I like the interplay between Nezumi and Shion, and like I said before, I won't be surprised if fangirls get all fanfic up in their biz.

There is definitely an intimacy between them. Nezumi/Rat feels a deep affection for Shion. He says it's because he saved his life, but I think he's moved by the fact that Shion is different. He's not a fully submissive No. 6 citizen, nor is he jaded by life outside its walls. Shion is his own special something. 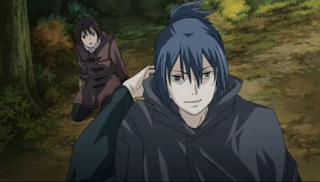 Nezumi is pretty rad, though I hope he doesn't spend the entirety of the series being all disaffected and emo like so many characters of his ilk before him.

The series feels like something new, so I really, really hope it can and does deliver something new.
Posted by William Shakespeare