Invisible Love, like most of Rie Honjou's work both as author and animator, is kind of squeeworthy. I'm most familiar with her as an illustrator, but she has branched out into writing as well. Invisible Love is a collection of unrelated (mostly) vingnettes centering on hidden crushes.

The title story, about college students Inori and Senou, is really sweet and ridiculous...so, of course I love it. Inori is an easy-going guy who has a tendency to get dumped by girls who claim he's not serious about them. His most recent girlfriend told him that she couldn't be with him knowing that someone else held his heart. (Awwww! Seriously, awww!) Every time he's dumped he goes to best friend Senou for support and guidance, and finds himself thinking--ah, if only Senou were a woman. One night, while drinking their troubles away Senou passes out cold and "dreams" about Inori. Mostly-sober Inori succumbs to Senou's sweetness and devotion and learns how much his friend really loves him. The next day Senou believes it is all a dream, and Inori keeps his secret hoping that someday Senou will have enough courage to confess his love aloud. Hijinks ensue, and...Squee! For course there is a happy ending.

The other stories in the collection center on similar "hidden" or "invisible" feelings between characters. In one a host club manager accidentally runs into a childhood crush. In another a department store worker befriends a new employee and learns about his past indiscretions. In another a new couple reveals their hidden desires. The mandatory school-boy story has an interesting sweetness to it, despite its...um...naughtyness? And in the last story a set of young lovers discovers they share a tragic past that has left both of them shaken. The interesting part of this thematic collection is the sweetness that tempers the obvious desire (and smut-itude) between the characters. Each story reveals some invisible connection that could end in agony or ecstasy.


As far as illustration goes characters are cute without being too girly. She has a knack for capturing subtle emotions in her drawings that a lot of manga artists lack; often a small gesture will surprise me during rereadings, and I like that. Although sometimes her illustrations are quite, ahem, graphic (with the getting-it-on), they're never gross or crude. Although, I just discovered she has a collection of S&M stories...huh. Her drawings and gestures border so closely to precious that I wonder how she pulls that off?

She is one of my favorite illustrators, but she has some odd habits. For one, she loves to draw people eating or smoking...even she has pointed out this odd quirk. She thinks people look "cute" drinking a soda, eating donuts or with a chopstick in their mouth. One big glaring quirk, which annoys not only me, but the author (enough so that she bothered to mention it in a post-script) is that she often has characters from different stories who look IDENTICAL! In the collection two of the stories featured side by side have confusingly identical protagonists. So, there isn't a ton of variation in her characters as far as illustration goes, but that's the case in a lot of manga, it seems. I swear in one of my favorite manga it took me two reads before I could differentiate between the best friend and love interest. I kept getting confused, and thought I'd eventually have to label them. So, it's a problem, but not one particular to Invisible Love , but manga in general. Just remember that the stories are, for the most part, unrelated...you'll be fine.

Let's end with some squeeworthy sweetness, shall we? 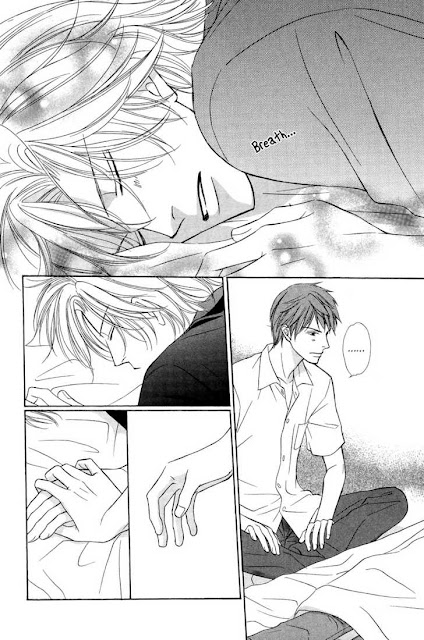