Sighing Kiss boys school love triangle manga with a sort of unexpected twist (not a major blow-you-away twist, mind you, just a slightly unexpected one). I will try not to give it away entirely. 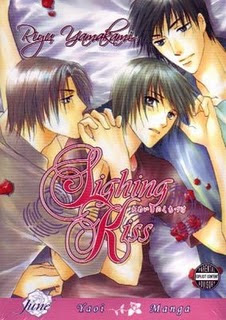 This is a strange manga, the love triangle set up is pretty much par for the course in school-crush yaoi, but the attitude towards sex is much more unattached and matter of fact than many yaoi manga who adopt a more feminine (I’m not even sure if that’s the right word) and emotionally based, rather than physically based sexual relationship. In this twist boy A is in love with boy B but ends up in bed (seeking physical comfort) from boy C. The sex comes first and the emotions second. It does bring up a familiar trop in yaoi that bothers me (it has implications that I’m not cool with) ; it can best be summed up as “the body knows first what the mind/emotions do not.” So, there are a lot of scenes in which someone rather forcefully (implications I’m not cool with) asserts themselves on a beloved in order to convince them that their desire is real. Or, that their body understands perfectly what their mind/emotions may not yet have realized or come to terms with. This manga takes that trope and flips it about a bit, and because of that it becomes (at least slightly) interesting. It isn’t perhaps as emotionally charged as some of my favorite manga…I do like me some angst…but it is still emotionally complex and psychologically interesting. Looking at Sighing Kiss with a critical eye reveals a lot of below the surface discussion of what love is, and why we are attracted to other people. The gay and cynical dorm mate, Tanabe, is an interesting, blunt and insightfully mature (most of the time) character, although he’s not always likable. Oh, let's be honest, he's a dick. A total and complete jerkwad. The lead Akira is a little oblivious at times, but he’s fully aware of his sexual orientation, the problems of his crush on straight, best-friend Tatsuya, and he’s actively trying to figure out what attracts him to the wrong guy every time. The only boring character is Tatsuya (the love interest), but this is less a result of his personality than his lack of attention. Even by the end of the manga we know very little about him or the reasons Akira may be attracted to him. It’s hard for me to root for the love interest when he isn’t given enough charactarization to make him interesting. His struggle with sexuality upon realizing he might actually be able to accept Akira’s feelings should be part of the story, and yet that important complication is relegated to the background, receiving almost no attention at all in the story. Boo. I might like Tatsuya more if I were able to see a little angst and passion on his behalf. Without it I'm left feeling rather detached from the situation.

Although the story is occasionally suprising, the art for this manga among my least favorite of the manga I own. Yamakami seems to have trouble with perspective and foreshortening, especially in relation to the human body. As a result, sex scenes become very strange looking—people lose their necks, and they twist in odd ways that should leave them with sprained ankles, hips and spines. She may need a life drawing class or two.

Overall, a good read, not great. I wouldn’t classify it as completely crappy manga. It doesn’t break my heart and I am left with the feeling that someone wishes this had. I don’t get that gush-pain feeling from this story perhaps because it is so matter-of-fact? Although the manga-ka is certainly trying to complicate what is otherwise a basic yaoi plot, it falls short and lacks emotional poignancy. And that results in a perfectly OKAY, and not perfectly stunning story. Meh.
Posted by Dr. M