Now, normally I give you, dear readers, a link to Amazon where you could, potentially, purchase a copy of the manga/anime we are discussing. However, it appears that Makoto Tateno's Yellow is partially out of print. So, I feel bad talking about a series whose first volume is difficult to obtain. The good news is that volumes 2-4 of Yellow and volume one of the sequel Yellow 2 are still in print. And, if you look, and trust me you don't need to look very hard, you can find fan translations of volume one online. I will not guide you there, you can find it yourself, trust me! In fact, just scroll down the right side of the screen to where we mention sites we like and one of those sites might be FOXy enough to provide you with the MANGA scans (see what I did there? I know you did, because you are brilliant and insightful).

But, Amander, you say, fan translations can sometimes be very bad. Yes, friends, I know, but trust me, they're no worse than the actual translation in this case. Yellow volume one has the notorious distinction of being the one manga so poorly translated (by the publisher, mind you) that Ms. Shakespeare attacked my copy with a glue stick and some paper. Allow me to demonstrate with an actual scan of my favorite of her "alterations." 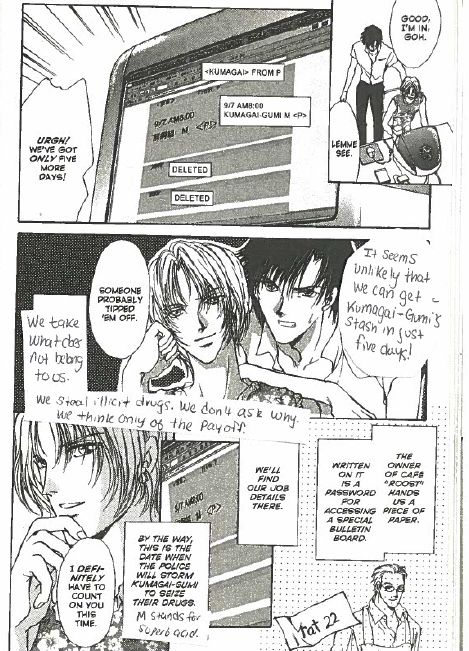 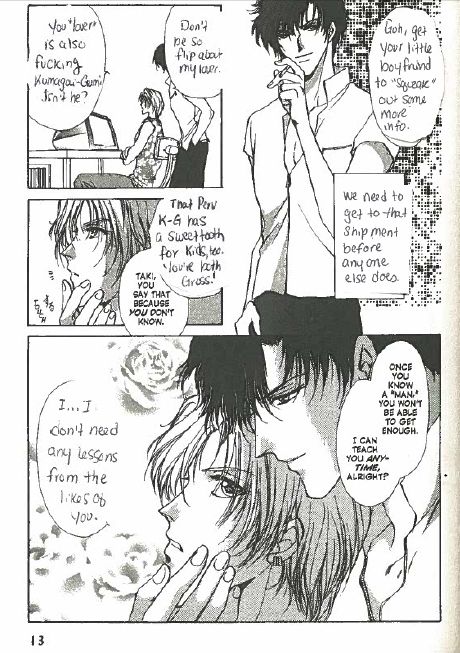 (Remember, this is manga in the original Japanese formatting, so read Right to Left and then Down the pages.)

That is Ms. Shakespeare's actual handwriting which you see so eloquently "correcting" my first chapter. They may have hired a translator/editor for subsequent chapters because they did get better, MUCH better. The first chapter of volume one is nigh unreadable. And that, friends, is why when Ms. Shakespeare borrowed my copy she could not help but improve upon the choppy translation. Thank goodness. (Incidentally, as a thank you, I altered a copy of one of her more, ahem, provocative manga purchases to include, um...junk. Yes, I drew in "parts" where parts had been pixelated or removed due to censorship in Japan. I'm a good friend! Such a good friend!!)

Here's the gist of Yellow: Taki and Goh are what they call "snatchers" who live their life in the metaphorical "yellow"/caution zone both professional and personally. They are hired by anonymous entites to "snatch" things like drugs, guns, evidence, etc. Taki is heterosexual and Goh is gay. They live together and most people assume they are a couple. Despite being only partners, they love one another very dearly and rely on one another in life or death situations which has formed a strong bond between the two. Each of them is willing to sacrifice themselves to save the other. Eventually Goh develops some rather strong feelings for Taki, and despite Taki's resistance (sometimes violent resistance) to Goh's advances, it is clear that it is only a matter of time before Taki succumbs to his intense love for (and of) Goh and their chaste partnership turns into a physical relationship. So, DRUGS! GUNS! ULTRAVIOLENCE! DIRTY SEX! I like it.

One interesting aspect to the relationship that develops between the characters stems from the fact that they know little to nothing about one another previous to their first meeting (a little over a year before the plot begins). Their former lives and identities (for the most part) are kept secret even from one another. On the surface this seems like this omission might insinuate a deep mistrust on the characters, but it doesn't seem to be the case. Each of them is trying to reinvent themselves, and feels so much trust in the other that pasts don't seem to matter. Unfortunately, not everyone feels that way and Taki's past catches up to him with a vengeance. The boys must negotiate their pasts with their future as both partners and lovers while both the good guys and bad guys are out to get them. The first series ends with a fairly solid conclusion, and feels complete (if not a little saccharine). The sequel series Yellow 2 is being released as we speak from June' Manga...and it is certainly good, but isn't great. I wish they had opted out of a continuation. I mean I like spending more time with the characters, but the sweet tension between the characters has abated as they are drawn back into the life of snatchers.

On the surface the Yellow series is a angst filled story with some light-hearted moments, and will appeal to both the yaoi crowd and detective story fans. Below the surface, for you analytical readers, there are some fairly interesting, although sometimes quite subtle discussions of the role of trust in a relationship, the definition of love (in all its incarnations), and whether abiding romantic love needs a physical aspect to be powerful and permanent.

I do believe there is a Yellow omnibus in print that covers all of the volumes of the first run.

Next time I'm in J-town lemme see if I can pick up a copy :)

Maybe it has better translations?

Also, can I just localize all day long? Let me at it!

Localize? What does it mean? I don't understand it.

Localize me to what it means, please?

Yellow Omnibus #1 is also hard to come by, I saw some pretty high asking prices. Some were RIDICULOUSLY high. And none are customized like mine is...I could sell that crap for a fortune.

Localize basically just means to make it sound like it actually came from a region.

It's kind of like what I do when I write UK and Australian copy, spellings, turns of phrases, etc.

It's easy to get something into a language, but to make it actually sound like something readers and speakers of that language would understand is a different story.

For instance, there is a line in Tokyopops US additon of Fake about something being "harder to get into than an Avril Levine concert." This line always struck me as an interesting one because it forever dates the book, but I always wondered what the Japanese equivilant to Avril Levine was?

Anyway, can you tell I had insomnia last night? I'm so tired that I just keep going :(