"In Love" series by Hinako Takanaga--Manga

Titles: You Will Fall in Love, You Will Drown in Love (1, 2, 3)
Author/Artist: Hinako Takanaga

You will Fall in Love is a one-shot (single issue) manga, that has morphed into the first in a spin-off series of yaoi (gay romance manga) centering around (can you guess?) love triangles!

I suppose since I am discussing yaoi (yah-o-ee/yah-oi) I should explain a bit what it means. I know Ms. Shakespeare has a full academic explanation on her docket for the coming weeks, so I don't want to step on her toes, but I do want to provide some background for readers (all two of you) who might be unfamiliar with the term.

Yaoi is a genre of literature (both manga and novels) or anime (I have never seen it used in relation to live-action film, but I suppose it could be applied there as well) that centers on male-male relationships. What is surprising about the genre is that it is written primarily by women and absolutely FOR women. Ms. Shakespeare and I have had some fantastic discussions about the appeal of yaoi, so I will leave the heavier work to her, but boiled down here's why it "works:" most romances (yes, these are romances) have set gender roles, and require female readers to identify with the female protagonist of the story in order to connect with characters and the book/whatever itself. Now, I run into some problems with this. I actually hate romance novels, romantic comedies and, well, romance in general. I have a few gender issues (well, the world does, I'm fine) and haven't been able to identify with a female lead in like...well...have I ever? Holy, whatzit, I may have never identified with a female lead! No wonder I hate romance novels, huh? In yaoi, I don't have to identify with one gender over another, I just have to identify. And I do, with whomever I like most. So, in yaoi I am not expected to identify with the female in the story (there is a suspicious and significant lack of female characters in yaoi in general); I get to identify with whomever I wish. Hooray! Another appeal may have to do with the resistance of traditional Japanese culture to such relationships...it's all very Romeo and Tybalt (which would be kind of appealing, IMHO). A truly compelling love story requires resistance. All of my favorite romances (there are some) center on an ill-advised or taboo relationship which is met with resistance/disdain from either society or, at least, the characters surrounding them. This is something Ms. Meyer seems to have forgotten in Twilight, especially when comparing the vanilla pudding of the central relationship between Sparklesuck and Snore-ella to the torturous and forbidden relationship of Heathcliff and Catherine of Wuthering Heights...ARGH! That's another story though, back to falling and drowning in love, right?

We need a chart! 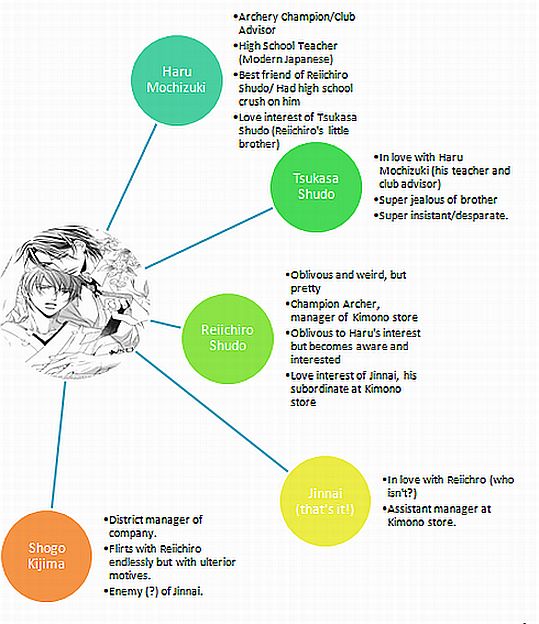 Yeah, don't say I never did anything useful...because that there is some proof positive.

Triangles everywhere! So many triangles (depicted as circles...I blew your mind)! Tied up in the triangleness of these love stories are some other factors that threaten the relationships. For one, there are a lot of power dichotomies here that are tested by the dynamics of power within the relationships themselves. There's a student teacher relationship (which always feels icky to me since I am a teacher with some rationality...ewh! Skeeve!), subverted by the fact that the student is the aggressor. And there are a few power plays that center on the corporate hierarchy of kimono shops (which are apparently more cuthroat than I ever expected). There's also the fact that Reiichiro and Tsukasa are wealthy, privileged and gay (both of them? Yes, I know. Unlikely!) and have high familial, career and social expectations incongruous with their sexuality in a male-dominated and androcentric cross section of modern Japan that is concerned more with propriety and outward signifiers of success and stoicism than emotional connection. Wow, that sounded smart, I better reign it in a little, huh? No worries, in the next paragraph I squee my brains out.

It is totally cute. SQUEE! Tsukasa is totally sexy. Haru is sweet and shy. Reiichiro is a pretty idiot (I am unsure why everyone seems to fall instantly in love with him). And Jinnai is a dick, which I kinda love (I identify with him). And the author/illustrator Hinako Takanaga does beautiful work. She started as an illustrator for novels and other manga authors, but has branched out into her own writing. To date she has written and illustrated some of my favorite works. Although my favorite of her collections is a short series called Little Butterfly (That series freaking kills me every time! EVERY TIME!) the "You will ____ in Love" series is strong, and it does use older characters (something I love, remember).

I've posted the links to the series below for interested readers, and am anxiously awaiting the release of You Will Drown in Love 3, which releases in early August. I'm hoping that the love triangles will be resolved in pleasing (and angsty) ways.