The three volume Little Butterfly series by Hinako Takanaga is the kind of manga I read over and over again because of the complex emotional bonds that develop between the two main characters and the general beauty of the artwork and sentiment. Be warned, this is not for everyone: it is yaoi (boy/boy), it is about high-school seniors (kind of icky), and it does have a few scenes that border on graphic towards the end of the book. I would agree with the publisher's rating of 18+ for audiences, but want to stress that this is not (like many less mature or sophisticated yaoi manga) a story about trying to get someone into bed. There may be a sexual aspect to this book, but it takes a back seat to the (sometimes literally) painful sweetness of what I think is Takanaga's best work.

The story begins with a school trip during which the adorably airheaded Kojima takes it upon himself to befriend class outcast Nakahara. Kojima, after much effort, is able to crack through Nakahara's rather heavy defenses and the two begin a tenative friendship. As their friendship develops Kojima learns more about Nakahara's past and personality. Nakahara is both neglected and abused by his constantly fighting parents and has retreated inwardly because of his feelings of resentment and inadequecy. He has blocked off his heart, and it is not until he begins his friendship with Kojima that he allows himself to risk bonding with anyone at all.

Nakahara breaks my heart. He is a tragic and thoughtful character who finds in Kojima the kindness, sympathy and love that the world has denied him for so long. Kojima is a sweet ding-bat who sees the world and Nakahara as full of possibility. It is the belief that Kojima has in Nakahara that pulls him from darkness and gives him hope for some future. The relationship that develops between the two is one sided at first, with Nakahara revealing his feelings for Kojima during an intensely vulnerable moment (as he seeks comfort after an even more intense family fight). Kojima is slower to respond, taking time to consider his feelings and response before coming to the realization that he does, in fact, love Nakahara.

The tensions and emotional openness of the characters seem perhaps a bit more perfect than natural, but that does not detract from the genuine feeling these characters exude. A few stilted soliloquies and apt metaphors reveal interesting psychological and sociological views on love and friendship, self-respect and self-denial, and emotional risks.

This character-driven, semi-tragic manga is among my favorites of all time. And since I find myself re-reading it a few times a year it has been worth the purchase price for me. Honestly, moments like the one below have made it worth the purchase price for me. Now, the omnibus edition (all three volumes in one) is available for a ridiculously low price. It makes me want to buy it for other people.

Aw, Nakahara...you're killing me. Seriously. How painful is this panel? He's bruised and vulnerable and still so intensely honest that he can't keep from telling startled Kojima the truth. I just want to squee-ze them both. Good luck kids! 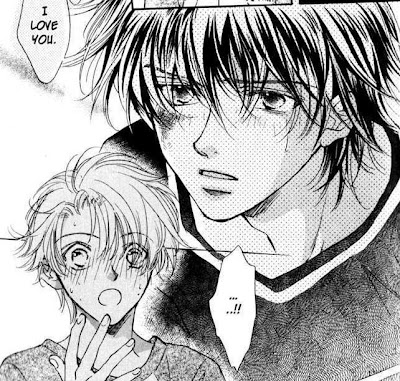 Oh, man, I forgot about this manga. It's really painful. I loved it. I should pick up the omnibus.