I'm going on record as saying I hate FLCL. I think every character, except for main character Naota is annoying to the nth degree. But chief among them is antagonist Haruko Haruhara. She could not be more annoying to me if she tried.

That's saying something because there are a LOT of annoying characters in anime. Nearly every series has one annoyingly hyperactive and grating idiot. In Ouran it is Renge Houshakuji (self-proclaimed manager and ubiquitous crazy fangirl)--every time she comes on screen I get annoyed. In Bleach there are a ton of annoying characters...too many to list. In Yami No Matsui those effing bird librarians have such horrifyingly irritating voices and personalities that they should be eaten by dragons out of principle.

But Haruko Haruhara wins, not just because she's annoying, irrational, stupid and ultraviolent, but because I find the entirety of FLCL annoying. It's just so...dumb (for the lack of a better word). Just DUMB! And because she is the most annoying character on the most annoying anime she has earned Day Six props. 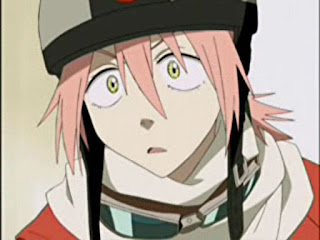 Congrats! You are annoying!
Posted by Dr. M

I have never watched this anime, and probably won't now.

Ha, I almost picked Chihiya from Earthian, but actually, I hate all the characters in Earthian (the anime). The manga is good.

I just don't understand the popularity of FLCL! ARRRRRRGH! I still haven't seen Earthian, or if I did I blocked it out.