Day 5 - Anime Character You Feel the Most Like: Nelliel Tu Odelschwanck 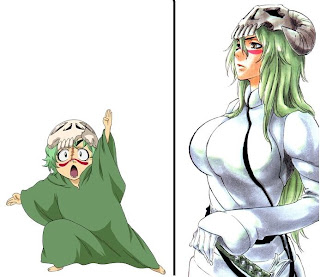 The character of Nelliel Tu Odelschwanck (Nel) is introduced in her child form (above left) in the seventh season of Bleach. Nel's child form is very affectionate, animated, loud and troublesome. That's me. She is playful when she should be serious and is generally a pest. That's me too. She runs around with bare feet and has a cracked hollow mask that looks like a cartoon skull on her head. I would do that too. I wish I weren't Nel, but I am. My husband, Roy, (yeah, someone married me) watches Bleach  with me, and the first time Nel came on the screen he said, "Look, it's little you." And I said, as I usually do, "Why's every little loud troublesome thing me?" It was a rhetorical question. I know why. Yes, Nel is little me. Also, her drool has healing properties...I don't know how that fits in, but whatever.

Here's the thing that's lovely though--Nel has two forms. The adult Nel (on the right) is pretty fucking badass, concientious and honorable, but her badass is limited in that she can only be badass for short periods of time before her energy is drained and she reverts back to Child-Nel. This is like me; I have very little staying power with the adultness. Nel is cool, and although viewers find out later that she is "officially" one of the "bad guys" (an Arrancar) she isn't very bad in either of her forms. She, unlike the other Arrancar, avoids fighting, and believes that warriors should be honorable at all costs. There must be a reason to fight, and something worth fighting for. I believe this too. She changes for the first time into her adult form to protect Ichigo (who has the best name of any hero...Strawberry the Soul Reaper!) from harm at the hands of a dick-head Arrancar named Nnoitra Gilga (sexist douchebag) and is nearly killed in the process. Although Nel doesn't say so, I know she is willing to die to protect the people she loves. I respect that. I would die, or kill, for the people I love.

Like Nel, I can be pretty badass in short bursts, I am protective of the people I love, I can be serious and even (dare I say) complex, but essentially...why not be a happy, loud, troublesome child? There's some blending of the two that seems important and well, me. That and Adult Nel has quite the bodacious anime-rack...I too am burdened by a bodacious rack. It sucks.

So, although I'd rather be someone more together (as in whole and as in respectable/responsible/with-it), I'm not. My scowling, serious, smirking side has to put up with my loud, troublemaking, affectionate side. I like to play. I like loud things. I like to run around barefoot. And although I'll let myself be pushed around to a point, don't push anyone else who doesn't deserve it, or I'll go all centaur on your ass with nothing more than a smirk and a "heh."

Odelschwanck, out!
Posted by Dr. M