I have more manga crushes than anime crushes. I mean there is ONE episode of Fake, so I suppose I could put Dee Laytner down here and technically not be cheating. I love Dee. LOVE HIM! I won't even try to help it. I like mean boys.
So, in the spirit of liking the mean/tragic I'm going to have to go with Eri Yuki of Gravitation, who has already been mentioned by Ms. Shakespeare and I several times. 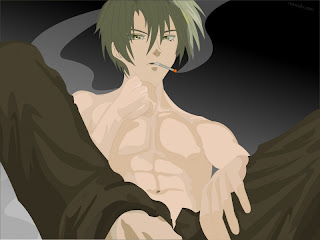 I wish the artist had added their name to this picture so I could give them credit, because when I found it I was all...BISHONEN BUDDHA! That is hot!

Eri Yuki is cruel, sarcastic, devious, talented, tragic, scarred and beautiful. He's a writer, and he's a total asshole when it comes to emotions. I appreciate this.

Some of my favorite cruel quotes (directed towards Shuichi Shindou, his "lover?") from Yuki-san (many from the manga rather than the anime):

"You're boring when you're not acting stupid... but you're even worse when you're trying too hard. If you want to get all emotional, then go someplace else. Take some Ritalin. I don't want to hear you bitch and moan." (Track 7)

""Now that's the self-centered drama queen I know. That self-sacrificing bullshit was as dull as dirt." -(Track 30)

Eri Yuki is a dick. A total dick. But he's funny. And he does do the right thing. And once in a while he pulls out a charming confession like this one:

"It's hard to be truthful sometimes. I respect that you [Shuichi] can always be so honest. I don't know if I can be that way, but I'll try. So... don't ever leave me again. It's inconvenient not to have a hole to fuck when I get in the mood." (Track 42)

I told you I'd do Dee, but there's one episode and it doesn't do him justice still...Eri is so mean. You can do him too... (hehehe, do him).