Oh, man, I should have left that Mirage of Blaze epic scene for the saddest scene. It is pretty sad. Along with Epic, most anime is also really good at Sad. What do I mean? Well, there are plenty of cliched "sad" anime-types.

Both Ritske and Soubi from Loveless are sick sad tragic figures: 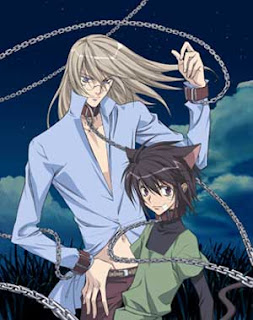 How about Yami no Matsuei's Tsuzuki and Kurosaki? 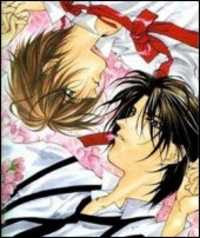 Here is a familiar anime cliche: Character X is abused as a child, maybe locked away or shunned because he/she had some differentness about them, light hair, psychic powers, nothing-definable. Character X is miserable. He/She reaches out innocently only to be abused and abandoned again and again. Maybe Character X had parents who he/she really loved, but some douche bag killed them, those wonderful people, right in front of Character X (Bonus points if said killer is someone Character X really loves and admires).

Everyone loves Character X, and Character X begins to little by little find worth in him or herself.

One of the reasons we girls squee over anime and manga is because it is full of pain and suffering. Our favorite characters are tortured, dark, unloved by their parents, abandoned, abused by their teachers, left for dead, beaten, starved and special. Our favorite characters are the saddest of people. We want to gather them up and hug them. They stir something inside of us.

Sad in anime is overdone. I like it both ways, when it's fresh, and when it's an obvious stereotype.

I think I actually really like the scene from "Welcome to NHK" when Tatsuhiro Satō accidentally enters a suicide pact, which he thinks is a tropical vacation.

After some misadventures, he decides he will commit suicide, but he is talked off the ledge by his friend, Misaki Nakahara, who convinces him that she needs him to live because she needs someone more pathetic and lower on the social ladder than she is. Then his other friend, Kaoru Yamazaki, tells him, he is too boring to have a dramatic death like suicide.

This scene is so depressing because it feels really true. Enjoy.