Mr. Empty: A Manga You'd Like to See More Of

Ahhh Zombiepowder! I really want Kubo to go back and do more volumes of Zombiepowder. But if you're following the mangathangathan, you know I've already talked about ZP and therefore I will pick another one.

I'm actually going to choose one that wasn't left in the dust, but was rather just achingly short. The manga for FLCL is just agony. Pure agony. It's only two volumes. Two! TWO! If you've ever watched the anime, which has reached cult favorite status, you know that this is some psychotic storytelling we're dealing with, a Japanese Hunter S. Thompson. That's a terrible analogy, but you get some idea of the madness coming down the pipes here. 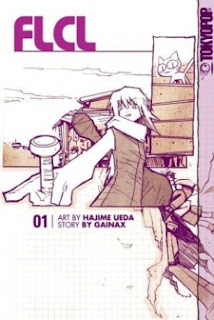 What is interesting, is the two volumes actually do a really excellent job of being an expositional aid to the anime. There's a notorious and pretty famous scene of animated manga pages in the anime, and they're interesting to see in their original form. You just want to see more, and more, and more, and you get to the end and just have to throw your arms in the air and flop on the floor like a wild fish because the lack of content has turned you into a trout.

The volumes don't work terribly well as manga by themselves, they're very discombobulated, which shouldn't be a surprise to anyone. They explore a bit of the relationships between the family, the classmates, and the other characters. I really wanted to see deeper exploration of the characters, the storyline, and the bizarre world. I just wanted more!
Posted by Mr. Empty