Mr. Empty: Day 5: A Manga You Would Recommend to Everyone

This one took some serious, deep thought. I can't even explain the process that went into this. Can you imagine a series you can recommend to everyone? It involved a lot of meditation, some hot yoga, and four gallons of Arizona green tea. The conclusion is this: 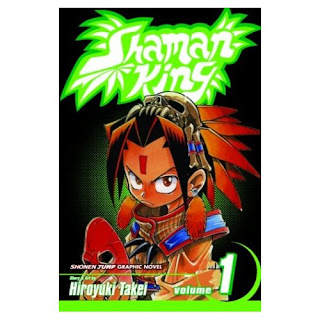 Shaman King. It's innocuous but noteworthy. In fact, I started watching the anime version when I was but a young lad in the sweltering heat of a southern summer. Fox ran it, Saturday mornings, and I was glued to the set religiously. It was one of the first instances where I had serious, prolonged contact with an anime series, and it was appropriately true to Japanese form, waiting for one episode every week like a manga magazine. It wasn't until much later I found myself in front of the actual manga for the series, drooling like a wild dog staring down a deer with a gimpy leg. The series has a lot going for it. The story is novel, a boy who can see ghosts. OH WAIT. That's not novel at all. In fact, it's the premise of 75% of the series Shonen Jump boxes up and ships to America. But, Shaman King was one of the first. And, he can do more than just see the ghosts. He can also be possessed by aforementioned ghosts, and utilize them in battle! Novelty, ho! That's not all. This is one of SJ's classic "let's run this series and then run it and then we'll run it some more and we'll be a good company and make money simply by virtue of having MORE MANGA THAN ANYONE ELSE EVER" schemes. Who even knows what number Naruto and Bleach are on now? That's the beautiful thing about Shonen Jump. You don't have to be a great artist, building a body of work across a wide number of different series. No. You need one volume. You take that one volume, and if the 10-14 male demographic likes it at all, you're set for the next 500 books and you can retire on a mountain of tween cash in your early thirties and let your ghost writers handle the spin-offs.

None of that has anything to do with Shaman King. Here's a real, ten solid reasons rundown of why this is worthy of recommendation:

1. It has a lot of volumes; therefore, you can get very involved in the story and it will last you a long time. Nothing's worse than an amazing story that's three volumes long, all you can do is crave.

2. Yoh is one of the best main characters ever. As you learn very early on, Yoh's only motivation is to create a world in which he can relax. He's literally powered by laziness. It's hilarious and genius.

3. It's got sneaky violence. That's the best kind of violence for young boys, because you can fob it off on your unsuspecting parents as not being violent, but then, boom, flashlight under the covers, you've got all your violence right there! Impalements, possessions, necrophilia, necromancy, and a healthy portion of good old-fashioned ass whuppings.

4. It has history. Is any of it accurate? No idea. Would not recommend using information out of Shaman King on your Modern East Asia final exam. But it's fun to read.

5. It has an anime tie-in. That you can only watch if you grew up in the late 90s, early 00s. It is virtually impossible to find or watch now. This point is, uh, not so great. Kind of depressing.

6. The side characters are badass. I could run through the expansive list of seriously cool characters, but if you read it yourself, I guarantee you will not be disappointed. (Faust is a personal favorite of mine, though.)

7.  The story is solid. You don't get the sense that it was warped from an original storyline to be extended. It gets deeper and more complex, but in a convincing way. As you get deeper and deeper, the characters progress and develop, but they stay true to themselves. It is genuinely well written. Not a lot of series that span as many volumes can boast that.

8. Pompadours. Glorious, multiple-feet long, pompadours. Not enough manga has them.

9. It has multiple romantic storylines. Can't dismiss it as typical shonen fare, it has a love triangle, it has lost loves, all sorts of love.

10. It's the classic epic adventure tale. It's like The Hobbit. You just can't go wrong with the formula. It's been tested by time and it's survived for a reason.

There you have it, a manga I would definitely recommend to everyone. No easy feat.