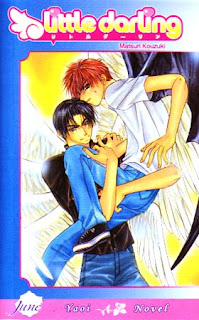 The first thing I noticed about this light yaoi novel is that it was illustrated by, Naduki Koujima, the mangaka who did Our Kingdom, a series that M happens to really like. When I saw Little Darling hanging out on the shelf at a bookstore in J-town a couple of years ago, I figured I would pick it up, give it a read and then send it on to M to enjoy.

The word "enjoy" is relative, I guess, and after reading this book, I decided it wasn't worth the price of postage to send.

The back cover of the book says "Matsurie Kouzuki's two-part comedic romp takes into a world full of beautiful angels and sensual demons." If you have not figured out by now, I love things about angels and demons. The cover goes on to say, "Making hilarious use of some of the staples of the genre we've grown to love, Little Darling is a silly and steamy tale that is sure to entertain yaoi lovers looking for a bit of fun!" The phrase, "bit of fun," is also relative.

I guess the cover didn't lie per se. In someone's mind, this book is fun and whimsical, but I guess I am too broken in my soul to understand.

The story centers around an adolescent demon, Kaie, who is a hermaphrodite. He is dude identified and he wants to grow up to be a fine example of a man. One day, his body will decide for him, and one set of parts will go away. Kaie is really looking forward to that day.

So, one evening, Kaie and his demon buddies are hanging out when they get an a call over demon radio or whatever, the heir of heaven has gotten loose, and the demons need to find him. They find the kid at the top of Tokyo Tower, and by kid, I mean, kid; he's somewhere around 8-10. His name is Daine, and he falls instantly in lust / love with Kaie. Daine happens to have some issues, too. During the day he's a little kid, but after his evening bath, he turns into an angelic teen, roughly the same age as Kaie.

He spends the first half of the novel pursuing Kaie relentlessly to make him his wife, which he finally does. Then he spends much of the rest of the novel trying to convince Kaie to bump uglies with him while he's in his child form.

Okay, still with me? Well, that's pretty much the story with "humor" and adult scenes mixed in, and there in lies the problem. Daine's predicament is supposed to be funny, but he really is in a little kid's body for half the story, so a lot of the jokes and innuendo and angst are centered around this.

Of course, the author can say that Daine is hundreds of years old, but it doesn't matter. I still felt skeevy and uncomfortable reading this.

Am I a prude? Maybe. Probably. But, I'm okay with that.
Posted by William Shakespeare