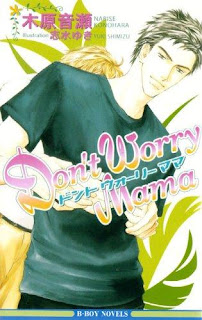 Ah, another Sunday and another light novel. I promise, Dear Readers, to cover a really crappy anime or manga next week to shake things up, but let us proceed for now.

Today's So Bad Sunday is Don't Worry Mama by Narise Konohara & Yuki Shimizu. Before we get started, I'm going to admit, with some degree of shame, I kind of like this story.

You may ask, How can you like it, if it is sooooo bad?, and I can only say, I am complex like that.

Also, I should say here that this story is not for the under eighteen crowd. There is nothing on the cover to indicate this, but believe you me, there is some sticky, dirty, doing it in here. Youngsters should avert their eyes.

Yuichi a likeable and capable enough employee at a pharmaceutical company is sent on a research expedition to an abandoned island with Imakura, his disagreeable, fat boss, with a mommy complex. They are looking for an herb that could be the key component in a weight loss tea.

From the get go, it is clear, Yuichi hates Imakura with a burning passion, the kind of passion one can only have for a despised authority figure. And, really, as a reader, you sympathize with him. Imakura is whiny, tubby, grubby and sea sick.

The men spend all day on the island looking for the herb, but never find it. Worse yet, the boat that was supposed to take them back to civilization never shows. Add insult to injury, their cell phones run out of juice. The two men are trapped on an abandoned island indefinitely.

There is nothing like starvation, diarrhea and rain to breed romance! The men struggle and fight. Imakura is useless. Yuichi wants to kill him. But soon Yuichi starts to notice that Imakura has soft skin or something. Also, he is losing a little weight and becoming less of a baby. Soon Yuichi can't stop thinking about his chubby boss man and keeps running off to shoot his load under the moonlight while imagining having foxy times with Imakura.

Eventually, Yuichi does trick the naive Imakura into having foxy times. Imakura really is like a child, as he still lives with his mom, and he has never done it with anyone because he's kind of hefty but also because he has some sort of issue with his em..hrm anatomy. But that is unimportant for Yuichi's purpose, if you catch my drift. Anyway, Yuichi tricks Imakura, explaining to him that he will practice with him and teach him how to do it, and apparently they need a sh*t ton of practice, much of it not very vanilla and graphically described.

Yuichi has been around the block a few times having had his share of the fellas, but he falls head over heels for little pudgy Imakura, who, in turn, thinks he has corrupted Yuichi and made him turn gay (though we readers all know that he was all gay to begin with).

So these intrepid men learn to live on the deserted island, and they have foxy times together, and they are happy. But, one day, they are rescued, and the fun is over.

Imakura's mama takes him away and won't let Yuichi near him. They both lose their jobs, and they don't see one another for a year. Then one day Yuichi is in a restaurant with his family, and he sees a skinny little sommelier. It is Imakura. Yuichi stalks him after work. They reconcile. They have more foxy times.

Oh, not quite. There is also an extra story in here that involves a school girl uniform, a beef noodle bowl and disposable razors.

M is totally skeeved out by this book. I actually don't hate it, even though it is ridiculous and pretty bad. Maybe it is because it involves two consenting adults who are in their late twenties and early thirties. There is some naivety and pressure but no noncon. There is some non-disney sex, but it is also between two characters who are pretty devoted to one another. To each relationship, its own island, I guess.

Read at your own risk because once these images get stuck in your brainbox, you can't take 'em back. Fair warning.

It's true! I am TOTALLY skeeved out by this book. I find the main character creepy and lecherous, and the love interest doughy, whiney and just...dumb. Guuuuh-ross!

Oh, wait until I review The Man Who Wouldn't Take Off his Clothes by the same author. These two look like a sweet, established and very mature couple in comparison.