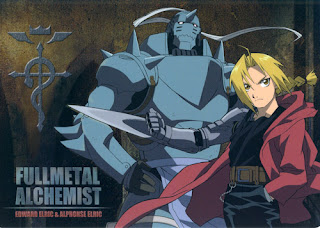 Dear Readers, I have been watching A LOT of Full Metal Alchemist lately, A LOT. And, by that I mean I just finished the original series, and I am already halfway through FMA: Brotherhood. All this week!

I've read some reviews regarding these two complementary series arguing one is better than the other. I'm going to go out on a limb and say: I really like them both. I think the background story from the first series informs how I see the characters in the second series, but I see them as very separate stories.

Maybe because I just finished up a five season marathon of Supernatural, I think it's easy to draw comparisons between the Elric brothers, and the Winchester Brothers.

1) Brotherly Love: Both stories focus around a relationship between two brothers, which transcends mortal life.

2) Absent, enigmatic fathers: John Winchester and Hoenheim of Light are both mysterious figures who love their kids but neglect them in pursuit of shadowy things.

3) Mother obsession: The Winchesters go back in time to try and save their mom from death. The Elric's try to transmute their mom and bring her back to life after death.

4) Return from death or the great unknown: The Elric brothers face the Gate of Truth, a portal that resembles the entrance to Hell. The Winchester brothers face Hell and Heaven. Characters in both series are tormented behind these gates.

5) My Brother the Freak: Sam is full of demon blood. Alphonse's soul is bonded to a suit of armor. They both question their own humanness.

6) We only have each other: Each series leaves you with the understanding that the brothers are so linked, each only has the other.

7) Out of the ordinary professions: The Elrics are Alchemists. The Winchesters are Hunters

8) Evil is out to get us!: The Winchesters have demons after them. The Elrics have Homunculi.

10) Epic battles of good and evil: neither show would be any good without them. 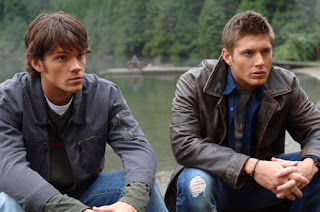 You are right! There are a lot more, but I figured I would stick with 10!