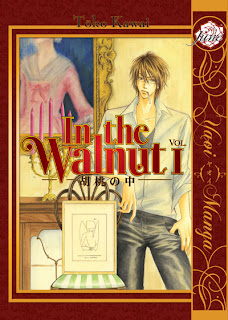 M and I were talking the other day. She likes stories about longing. You know, books with couples who can't get it together? They spend months, sometimes years trying to sort it out. They usually go a little like this:

Character One: Oh, I like him so much, but I can't say anything. I mean, we're both boys. It's probably wrong. I love him. I need to run away and be all tragic and sort my feelings out.

Character Two: (Nothing -- He is the strong silent type. His eyes do all the talking. When he does speak, He never says the right thing)

About a million pages pass where Character One has an internal ongoing monologue about all of his feelings. Character Two does something that makes him jealous and sad, maybe he goes on a date with a girl or Character One spots him with a cuter sempai or something. Anyway, something happens.

Finally, someone breaks. Feelings are shared. There is blushing.

Okay, so this is super simplified, but kind of true. I enjoy these stories, but I always find myself just skipping ahead to the sex part. Now before you call me a pervert (I can tell you are thinking it, Dear Readers!), it's not about that (Well, only a little.). I just happen to like it soooo much more when the characters are already a couple.

I don't like all the hemming and hawing and wringing of hands and does he likes mes? My favorite couples are semi-establish/fully-established. They aren't worrying about whether they like each other. They are so next level.

No, the conflicts in established relationship stories often come from the upheavals that come as the members of the couples mature and really get to know each other as people not just objects of affection. There's more contact between established couples all through the story than in an unrequited love story.

That's a minor breakdown of how I feel, so now, let's talk about a manga starring an established couple, In the Walnut by Toko Kawaii. I like this mangaka. Her art isn't the best, though it has gotten better. She wrote a manga a few years ago called Our Everlasting, which I absolutely adored, mostly because I can totally be all full of anxiety and bratty like Shouin, one of the main characters (but more later, later on relating to characters in yaoi). In that manga, the main character studied French and had a dog named Proust. That's enough for me.

Anyway, at the end of both volumes of Our Everlasting were a couple of smart one shots that took place at an art school, and one of the couples from those one shots were the basis for In the Walnut. The original story was a little longing and pining. Sohei, a film student, trades foxy times with this artist, Hideo, who looks absolutely fabulous on film, and like a wreck most of the rest of the time. Sohei, is a little strange; he can't stop filming Hideo, and Hideo is kind of disgusting. He smokes while he's brushing his teeth. He wears the same clothes all week. He doesn't bother with underwear. He rarely bathes. Still, he's smart, and I like him.

In the Walnut takes place after they graduate from art school. Hideo has inherited his grandpa's art gallery, The Walnut, and Sohei works for a small production company. They love eachother. They date. They are a couple. The manga isn't really about their relationship at all. It focuses around a set of people who come to Hideo's gallery on somewhat shady business. The biggest drama comes when Hideo wants to keep Sohei out of the shady business, but Shohei insists.

Honestly, I felt very neutral about this manga. I liked the characters so much when they were in the one shot that I was willing to read both these volumes. I kind of felt like they were mellower versions of the characters as students. They were nice and settled. The actual plots of the different stories just weren't super compelling to me. It was kind of art + mystery + a very little relationship action. Readers, don't expect any foxy times. There really aren't any. Still, I liked it. It's not a super squee. It's a lazy afternoon read.

I like Toko Kawaii because she always seems to tell stories that involve art or liberal arts, and her stories always feel comfortable and sweet. Though I would recommend Our Everlasting first.
Posted by William Shakespeare

Why the burgeoning, angst-filled, willthey/wontthey scorn? What did my favorite kind of manga ever do to you?

It's too bad about the art couple not being as good as you expected. I liked that gross guy. If I remember correctly he only looked good through the lens of a camera.

Oh it wasn't bad. It was comfortable. You know, there was nothing at stake.