No Touching at All -- Kou Yoneda 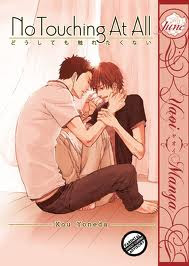 No Touching at All is a typical office drama type of one shot Yaoi manga. Shima is painfully shy. He was hurt in the past when he fell in love with a co-worker who was straight and who eventually rejected him. It made his workplace intolerable, and he had to quit. At his new job, Togawa, the boss, has taken notice of Shima, and finds him pretty cute.

Togawa is straight. Shima is gay. They start fooling around. Togawa eventually falls for Shima. He also gets offered a promotion at the same time. Togawa tells Shima he loves him, and he wants to make it work. Shima spazzes out. After all, he was rejected by a straight guy in the past. A month passes. Shima finally gives in, and they are free to be in love.

No Touching at All is a nicely illustrated manga and solidly told. The story follows an ongoing theme in yaoi, of the sweet gay boy who was put through the ringer in the past by a straight dude who couldn't sort out his feelings only to encounter a straight man who can variety.

If you liked Our Everlasting, you may also like this. If you are a fan of pining and longing, this might be for you, though, as a reader, I didn't feel there was too much at stake. Since Togawa doesn't waffle in his feelings, its really just a matter of Shima sorting out his own and trusting the relationship to work.

One technical issue with this manga is the word and thought bubbles are very ambiguous. It is impossible to tell which character is speaking in the majority of the scenes. I had to give up on a few scenes entirely, which is too bad. It kept me from really committing to the story.

Email ThisBlogThis!Share to TwitterShare to FacebookShare to Pinterest
Labels: dmp, no touching at all, Review, shakespeare, yaoi