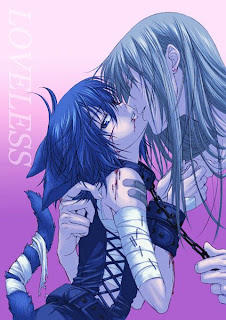 I'll give you fair warning: you're going to read a lot about Loveless here at Squeefinity, both the manga and the anime. M and I are big fans. We're both writers. We're both readers. We love words, and we feel, or at least I do, that this is a manga as much about language as it is about anything else. It's interesting for a graphic genre is so centered in language, or maybe not at all.

M and I also like to read things that make us uncomfortable, works that force us to fall in love with a character who may, to outside eyes, be despicable. Loveless can be very uncomfortable.

There is no doubt that the central relationship of this work is highly questionable. Soubi, a "Fighter Unit" is much older than Ritsuka, his "Sacrifice." The relationship is sexualized to some extent. Ritsuka may be exceptionally mature for a twelve-year-old, but the fact remains, he is twelve. Soubi's advances, though I'm not quite sure that's the right word, are confusing and comforting and Ritsuka is subtly aware that he can exert control over Soubi through what can sometimes be an uncomfortably adult affection, or a mimicry of adult affection. Soubi is an adult, and as such, should know better than to relate to Ritsuka in this way, but to be fair, he's lost and confused and in terrible pain himself.

In the context of any other narrative, I would find Soubi creepy --at the very least. However, Yun Kouga is a master story teller. She creates characters of such depth and complexity that what would seem like a clear cut taboo becomes something beautiful and forgivable when nestled in its framework. The relationship, which just isn't quite right from the outside, is the most stable and gentle in the entire work. It invokes a kind of a desparate feeling, a sad passion. It feels a little like a late Autumn day --you'll understand when you read it.

It's a manga worthy of intellectual discourse, because it is smart and elegant and beautiful and strange.

I disagree with Ms. Shakespeare when she says that Loveless feels like autumn. I'd put it on par with winter, were I looking for a seasonal metaphor. There is something so completely frozen and glacial about the feel of both the manga and the anime (perhaps moreso with the anime as a result of the ambiguous and heart-breakingly confusing "end" of the series). Both the manga and the anime are beautifully, and thoughtfully complex. The story itself, about the mutual salvation of an emotionally-amnesic 12-year-old and a suffering-hungry warrior, is extremely problematic. Time moves slowly, emotions are frozen by circumstance, and the strained and multifaceted (like crystals of ice?) relationship between these two main characters, albeit beautiful in its fictive, other-worldly portrayal, would be criminal in real life. As readers, we anxiously await a thaw, or a crack…anything that might end the sort of limbo these characters inhabit between love and brotherhood, trust and deceit, self and self. There are big, human issues at stake in this small series, and none of these issues are approached half-heartedly, or in any simplified manner. In fact, throughout the series these issues (of identity, self, consciousness, language, thought, power, love, truth, and ultimately existence) the discussion of these issues results in only further and further complication. This is a heartbreakingly smart series, but “heartbreakingly” is the crucial word; none of these intellectual discussions are divested of their emotional importance.

Hey, though there, partner in crime...how do I edit these posts? It's not giving me an option to do so.

I'll try to post more this weekend, I realize I'm being a slack contributor.