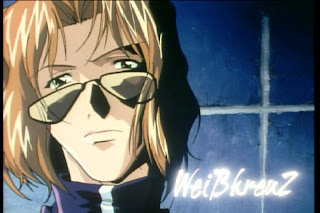 Florists by Day: Assassins by Night.

I was really excited about the premise of this anime. Four androgynous fellows run a peaceful flower shop by day. At night they are part of the elite killing squad, Weiss Kreuz. I figured that this was going to be a goldmine of sexual innuendo and angsty imagery.

One thing you ought to know about me from the start is that I have high tolerance for anything that might be considered aesthetically bad, not artful, you know "the suckage." I can sit through almost anything and find some kind of perverse pleasure in doing so...

That said, I made it through most of the first season of Weiss Kreuz and halfway through the first episode of the second season.

Season One's animation is just bad. It's clunky and not really not streamlined enough for an elite killing force. There's little continuity. One thing I noticed is that before a fighting scene the characters suddenly change out of whatever they are wearing and get into their battle gear. I know, when I have a crazed tentacle wielding science freak on my tail, a wardrobe change is number one on my mind. It's annoying, but, I can get past that. I've enjoyed badly animated animated shows, like, like, like...Well, I'll check into that and get back to you on that, Katie...I digress. It's really the plot, or lack there of that makes this my top pick for "crappy anime" this month.

First off, I watched something like 25 or 30 episodes, and I can't remember the characters names. Well, maybe one...Persia, WK's answer to Charley in Charley's Angels. But let's see, there's the tall, waify haunted one, the slightly more muscular and manly ladies man, the soccer star, and the orphan. They are all supposed to embody some kind of Bishonen archetype, but I can't connect with any of them. They all have some kind of dark past and were forced to join this band of assassins to vindicate themselves. No one really explains how they gained such mad skillz or how they were vetted by Persia, the shadowy leader (police commissioner) and Manx (look I remember another name) his lady sidekick. There's also no explanation of why they use the flowershop as cover. And, it's not like they are very low key. There are always a million girls hanging out vying for their attention.

Each character has or had a special lady, and the show dedicates some excruciatingly slow episodes "developing" these story lines, only to end them just as quickly. After all, these men are hardened assassins who don't believe they deserve to settle down with the ladies they love.

Some stuff happens. Really, some stuff, nothing you'll care about. It's kind of monster of the week, well, bad guy of the week and it generally goes this way: 1) Some innocent person is blown up, kidnapped, downs some bad sports drink, or buys a hypnotic CD that makes him/her want to kill people. 2) Manx gathers the members of Weiss Kreuz in the basement of the flower shop. Persia appears on a t.v. tells the boys about the bad things and asks them to assassinate people 3) There are some angsty moments, maybe a couple flashback scenes, 4) The boys go and kill everyone.

You know, I did really actually watch this show, but I can't tell you in detail about any one episode. It's quite forgettable. I got excited for a moment when the show started to get a little science fictiony with some psychic bad guys and some genetically altered chic fighters, but that all kind of went away in service to some plot about a military coup of Japan. The members of Weiss Kreuz reform (they broke up at some point in the show) and solve that problem by killing a lot of people. Then Persia gets killed and everyone is sad. Something else happens, totally forgettable, more people die, and then the season ends.

I realized that there was something wrong with this show or me when I decided to watch it at 2x its regular speed. I figured I could get through the season faster this way. What I realized is that watching this torturously slow and poorly plotted anime in fast forward actually made it kind of normal. However, it was still really boring and didn't get any better.

I tried to watch the beginning of the second season, as I had heard the animation was much improved. I'll give it that. The second season animation gets a thumbs up. The storyline does not. There's some kind of private school on an island where the kids are into mind control and "the orphan" enrolls to check it out. Anyway, it was bad, really bad and exasperated, I finally gave up.

My advice: don't watch it. It doesn't get any better. You don't want to make the mistake I did.
Posted by William Shakespeare

That's unfortunate. I think there's something very appealing about "florists by day, assasins by night." Too bad it didn't pan out.

How can there be no sexual innuendo? There's a soccer star, an orphan, a haunted waif, a stud, and a shadowy man pulling the strings...dang, they pulled out all the fangirl props in this one. What does Ouran call it? A Reverse-Harem? Yes. This should be a reverse harem of elite squee, as well as a flowershop/assasin dealio; I'm disappointed and I didn't even watch it.

One thing I am not a huge fan of: costume changes. Unless it's seasons 1-3 of Digimon, because that shit ruled! Or if it's kind of farcy and ironic like in Codename Shinesman. Why do people need a "slaying" outfit? Why is half the plot of some of the Mechs (Robot Anime) absorbed by people getting ready for battle? I guess the same holds true for florist/assasins. One question: do their slaying outfits have gauntlets or are they more strappy dominant/submissive gear? No, don't answer. The anime I'm imagining in my head is quite impressive...quite. Too bad it's not the real deal.

The costume changes in this are just annoying. If the animation were better, then I would say: bring on the slaying outfit. Unfortunately, these outfits don't do much for them as characters to begin with.

You know, I've read slash and fanfics of this show, so I thought it was going to be way better (more perverse) than it actually was.

Such a great premise, such a waste of my time.