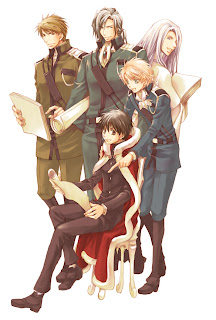 I'm something like a billion episodes into the anime version of Kyo Kara Maoh! -- a show that should be just this side of crappy, but somehow manages to hold my attention none-the-less.

It's basically a "Male Harem" story, which I've come to learn means that most of the characters are good looking dudes, something the manga points out right away when Yuri Shibuya, the story's main protagonist, is flushed down a toilet by some bullies into another dimension.

There is something for every one here. All the squee-worthy masculine archetypes are present and done well (and maybe that's why this show/manga captures my attention so much better than Weiss Kreuss could even dare).

You have some main players: There's Yuri, your (a)typical 15 yr old Japanese high school student with average grades and a love for baseball. There's Wolfram, a blonde haired, blue eyed, high strung, nearly feminine bishonen; Contrart/Conrad a gentle warrior-swordsman with good looks, the very embodiment of honor and loyalty, with a mildly angtsy past that gives him a little bit of an air of mystery and allows for some really dark moments (girls just love guys like him); Gunter who is an ethereal long haired, modelesque type beauty, not openly gay but not shy about his "love" for Yuri; And, Gwendal, a big fellow with a dark demeanor, who also likes to knit cute little animals.

Then there are any number of minor/major characters. And, there are women, too, who play main roles, like the Cecile, the former demon queen and Annisiah and Sussanah Julia (Yuri's former incarnation) to name a few. I like this kind of a balance in a Male Harem anime, because it allows for the fact tht women do exist. The central male characters are often sexually ambiguous, but there are relationships of all types around them. This, I think, lends some balance to the story.

The plot of this anime/manga is pretty much paper thin, which is why I'm so amazed that I am as charmed by it as I am. Basically, Yuri is flushed down the toilet into another dimension full of warring demons and humans. It turns out, he is the Demon King there, and he has a lot of work to do. So, there is some tension with some guy named Adalbert, but he is snatched away to his castle where he gets to know his retainers and staff. He accidentally gets engaged to Wolfram, who isn't absolutely unwilling, and also accidentally challenges him to a duel. Wolfram who kind of hates Yuri at first, plays dirty and uses magic and an innocent person gets hurt. Here we see the Demon King come out full force. He hates injustice. It really pisses him off. His magic uses water, and it's on a large scale. Everyone is amazed. Whoo, hoo. This applies to both anime and manga.

Later in the anime, we see Yuri's power's develop and the "storyline" emerge. There are some boxes that have some bad forces in them that are hidden around the kingdom and the guys need to get to them and reseal them so that everything will be peaceful. Also, Yuri wants peace between demons and humans. This "plot" is basically a vehicle for any number of adventures, flashbacks, comedic, action filled and angsty episodes. I know I keep knocking on the plot, but really, it's a long arc with a lot of detours and it seems less important than the relationships between the characters and the little things that happen along the way -- as in, as a viewer, I'm invested in the characters and that feels like enough. There are some cute and funny moments, but it is basically a dorkish endeavour. Anyhoo, my main issue with the show is that whenever something really terrible is about to occur, Yuri just goes into his super Demon King trance, kicks ass and saves the day.

That said. It's a cute anime. I have about 10 more episodes or so to go. We'll see what happens.
Posted by William Shakespeare