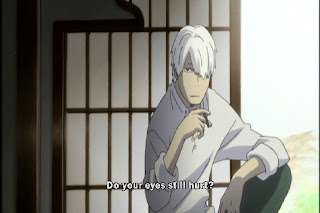 An emo Anime I might be able to get behind.

I just finished watching the first two episodes of Mushi Shi an "Award" winning anime. I don't know what award(s).

Hey, I give spoilers, but I don't like to be spoiled.

So far, Mushi Shi is slowish, quiet and mystical, a departure from my normal anime fair. I tend to be rather attracted to -- hmm, how can I put this? --"less serious" stuff. It's definitely the kind of show that wins awards, because it's the kind of show that can attract an audience with tastes more mature than mine.

It opens with a brilliantly melancholic emo/folk song by a Scottish singer and closes with what reminds me of the night music for "Animal Crossing" (Gamecube) -- very soothing.

The animation style is based on the original manga by Yuki Urushibara and reminds me very much of mangaka Yukine Honami illistration ("Desire," "Only the Ring Finger Knows," "Sweet Revolution," "Rin," and many more). If you like that drawing style, setting aside any feelings you may have about Yaoi, you will like the animation of Mushi Shi. The landscapes are lush and invoke a feeling of feudal/traditional/imagined Japan.

The main character Ginko (pictured above), with his Western style clothing stands out in this environment, but he's meant to be different. He, so far, is the tie that binds these quiet little stories together.

In tone I'm reminded quite a bit of the more serious moments of "Fruits Basket." I'm not sure there's much room for levity in this anime, but I'm only a few episodes in. It's slow going, and though lovely, I don't get that "squee" kind of feeling, like I must, most absolutely watch the next episode immediately. This, I must admit, is kind of nice. I have a lot to do, but I'll often ditch it all, if it brings me closer to the end of a good cartoon. I feel like I can pace this one out a little more and take it episode by episode.

"Mushi" seem to be some kind of spirits or moreover a spiritual energy that sometimes gets involved in the human world. Ginko travels from place to place "invesitgationg" and helping people solve their "mushi" problems. This makes the anime sound very "monster of the week." However, I don't think it will devolve into that, but I'll update you as I watch more.