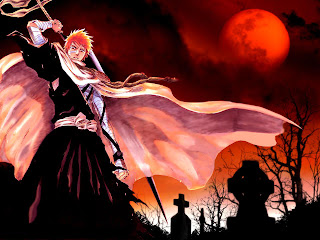 1) I slept a good night's sleep

2) I went to work today, got caught up in the commute, watched Jeopardy and ate plenty of food.

In conclusion: though I obsess, I still manage. It's all good.

Anyway, in the most recent 10 episodes, the show has finally gone back to being more of a teenage, highschool Soul Reaper "dramedy." Well, it did or it had for a couple of episodes, and I was really happy about that. I love the hard core fighting and the kind of heroic desperation that comes along with that, but I also like enjoying a few laughs and just catching a glimpse of the everyday realities that make the characters so endearing and well, so awesome when they do step it up.

I was happy to see that Renji was assigned to "the real world." I like him infinitely more than Rukia. Listen, I like Rukia too, but she did get kind of wussy in the last half of the Soul Society/execution story arc. I suppose she had every right (she was facing death), but I liked her so much more when she was just a bit more bad ass and self-confident. Few things are more annoying to me than strong women who just kind of disintegrate. I'm sure she will recover and return as awesome as ever, but like I said, I like the foil of Renji just fine.

The story is taking another turn I'm not so sure about. Just as we leave the turmoil of the Soul Society (along with the introduction of about a kigillion new characters), the plot is complicated by the introduction of three Mod Soul characters who play psychological tricks on our motley crew. Meh, I don't like these episodes at all. They are kind of high stress with little payoff, and I'm hoping the story line doesn't go on forever.

I'm way more interested in seeing Ishida deal with the loss of his Quincy powers. I'm sure that will come up soon.

In other news, I passed my Japanese class, and I still barely understand anything. Boo.
Posted by William Shakespeare

I'm at Ep 91, and I have to say that although I hated the mod-souls at first, they've grown on me...particularly Noba, who I think is almost as cute as Kisuke (Mr. Hat and Clogs)and Shuhei (the shinigami with the 69 tattoo on his cheek).