What manga would you most like to see turned into an anime? 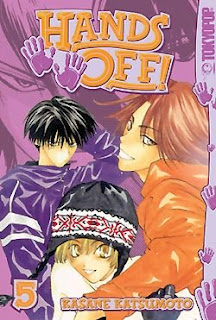 Great question, Shakes! <- Yeah, I'm talking to myself. What of it, huh?

The manga I'd most like to see made into an anime is "Hands Off" by Kasane Katsumoto. It's a cute, short series (If you don't count the prequel, I think it's eight volumes) about a couple of teenage psychics, cousins, Kotarou and Tastsuki, and their not at all gifted, but truly earnest friend Yuuto.

It's a treat of a story. It strikes just the right balance between humor and drama, and I think it's the kind of manga that would appeal to both sexes. I wouldn't really say it's shojo or shounen, which I think is kind of rare in manga for a preteen/teen target audience. What I'm trying to say is it has broad appeal, and I think that's important.

Basically the story goes as such. Kotarou is a really sweet hearted puppy dog of a teenage boy. He's kind of pretty, but he's obsessed with being masculine, and he loves basketball. He had to leave his former school because he was being bullied for being efeminate. He goes to live with his grandpa and his cousin, the dark and brooding Tatsuki.

Tatsuki is a prickly pear. He and Kotarou used to be the best of friends, but something happened and when his cousin comes to stay, Tatsuki is ice cold to him. It turns out that he can see the past of places (usually the awful past) and when Kotarou touches him, it's magnified.

Yuuto is a long haired, womenizing gem of a character. He sits in the middle between Kotarou and Tatsuki. He's not naiive like Kotarou, and he's not cold like Tatsuki. He somehow manages to hold them all together.

If you drew all of your conclusions about Japan based on this manga, you would think it was a horrible place where people frequently cross dress and criminals roam free. This trio does get in a lot of trouble. Kotarou gets kidnapped more frequently than any character I've ever met. I realize this is to showcase Tatsuki's distant dedication to him and Yuuto's commitment to them both. That could get a little tired, if the relationships weren't so strong. As a reader you want to see how the people around Kotarou react to him getting hurt and how he takes it in stride.

Anyway, things happen. These three investigate. Psychic powers are revealed. Friendships are formed. Obviously the psychic powers part is important. It informs the characters. But, it's the strenght of the relationships that make this manga shine.

I think it's a story that would translate very well to an anime series, and I hope it does one day.
Posted by William Shakespeare