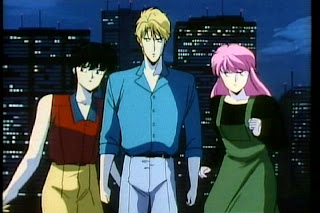 There comes a time in every fangirl's life when Earthian must be watched. I've been putting it off for years now.

Here are my reasons: 1) Yun Kouga is one of my favorite mangakas. I've talked about Loveless here in glowing tones. It's a truely amazing manga and all around story. I don't want to be disappointed by a grand failure. 2) I've heard that Earthian, the manga, is better than the OVA. Nope. I haven't read it yet. I know, I know, I should. How can I call myself a yaoi fangirl if I haven't read such a "foundational" work? Well, like I've said before, I'm more of an academic fangirl with a lot of inner squee, but I haven't quite crawled to the top of geek mountain nor have I fallen off of it yet (and no, I don't expect that to mean anything to anyone). The point is, I've always planned on reading it, but never seemed to find the time...Oi. 3) The OVA animation has always looked terrible to me. Yes, Yes, I do love the crap anime, but I have to be in the mood, and I always seem to be coming off the tail end of some other crap anime. Boy was Earthian lucky though, because last night I found some time to watch the first two of four OVA episodes.

And, here is my biggest observation: they are "the suck." I hate the animation. I find Chihaya to be about the most annoying uke I've ever had to watch onscreen. It's just painful. He's weak and overly "sensitive" to the point of pure stupidity. I can't relate to him.

And, I can't relate to his partner, Kagetsuya, either. He spends much of the first episode acting really annoyed with Chihaya, too, but instead of just leaving him to molder and die (like I would) he continually follows him around on his painfully boring adventures.

So, they're angels, these two, and they investigate the good and the bad parts of human/Earthian society. Chihaya claims to love humans, but as far as I can see, he mostly hangs out with humanoids who have been created by mad scientists and junked out rock star Lucifers (fallen angels). These angels don't have any superpowers. They just have wings. And, in what I am certain is the surest indication that an anime will be a crap anime, when they reveal their wings, their hair grows and they get angel outfits. I'm sorry but long hair and fancy outfits don't fight crazy monsters and henchmen.

Whenever these two encounter henchmen, and that is often, Chihaya almost immediately gets captured and starts calling out Kagetsuya's name. Kagetsuya dodges some bullets, punches some people and rescues Chihaya. Yawn. Totally boring, but this seems to be the gist.

I've heard there are some sexy bits, as these two are also gay for each other. And, man or man, do I love gay sex --I'm not being sarcastic at all -- but I've been around the yaoi block enough to not have much patience for a story that lacks payoff. So, I guess there's probably some kissing and stuff. Yeah! I just don't know if I have the heart to sit through the rest of this and find out.

Guess I'll just have to read the manga.
Posted by William Shakespeare