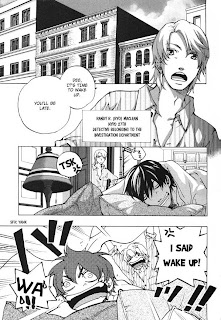 It's like finding a whole new Beatles album or something! I think I'm going to have a Squeezuire!!!! Ha! Ha! I've been writing bad copy all day, and I just heart my little puns.

I have not yet read M's below breakdown, only scanned it enough to get the feeling of a little bit of disappointment.

Hmm, I wasn't disappointed by Matoh's one shot depicting Dee and Ryo's future lives together...but who know's? Something as good as Fake can't be repeated, or can it?

I've read the series like 10 or 15 times and I always want it to go on and on and on and on. It's one of those things that could sustain itself for a long, long time, but again, we shall see.

I'm off to watch Jeopardy, read Fake part Deux, watch Blood + and maybe study up on my Japanese particles. Ugg, man, you got to watch out for those suckers.
Posted by William Shakespeare

We MUST talk, I really love Blood +...by far the best sequel to outdo it's prequel ever (I thought Blood the Last Vampire was lame-o! That's not my Saya!)

My warning: please have a box of tissues handy for key moments, and please notice one character in particular who looks very like a certain prince-like character (with "inner mind theater") we already love.

When you're done we'll chat.

I'm watching Blood +. The prequel didn't look interesting to me. Although, I've heard it's being made into a full length live action film by the makers of "Crouching Tiger Hidden Dragon." So maybe that will be good.

I swear that Blood + has the same plot as some other show I've seen but I can't place it. It's really bothering me, but whatever.

I think that Blood + is on the whole better than that anyway.

I'm getting a little more into Vampire anime right now because I love, love, love shinigami/soul reapers, and I feel they have a lot in common.

I know you love the shinigami, who doesn't.

Where are you in Blood +?

Have you cried yet?

I was, like a crazy loon, rereading the orginal Fake and I decided to compare the art in the first issue to the art in the last issue and then look at the new series. I have to say that the new series has more in common with Satoh's drawing style in (the BEST EVER) issue 7 and Post-Script than it does with issue 1. Issue 1 is a little weird in an old-school manga/anime style. Her artwork develops throughout the series, and the new series just seems to be a continuation of that development.

Either way...DEE! Go back and look at issue 1 Dee and see if you see what I mean about the change in style...issue 1 Dee is, of course, fantastic in every way, but the artwork is strange...he hasn't quite become Dee yet...although Ryo is always very Ryo. The issue 7 Dee looks like my mental image of Dee.