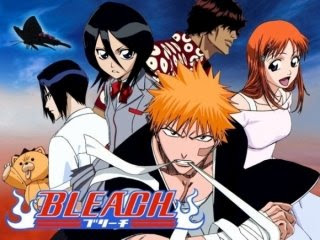 Happy Thanksgiving! I'm currently on Ep. 57 of "Bleach" an anime that may actually take me a long time to watch. With something around or over 200 Eps and counting, I don't see it going away anytime soon.

This is not a crappy anime. In fact, it's pretty alright. I really liked the first season the most so far because it did a good job of mixing "ordinary" teenage, highschool life with something supernatural. Now that all of the characters' special powers have been activated and they are hanging out fighting in the Soul Society, it doesn't feel as much like my kind of anime.

Before there were a lot of reasons behind things. The show was slower and Ichigo was discovering himself, and even fighting against becoming a Soul Reaper. Things have changed, and he is coming into his own.

There is a lot more fighting in the second and third season, well a lot more different kind of fighting. Instead of the fights being between Soul Reapers and Hollows. It's mostly Soul Reapers vs Soul Reapers or Souls/Humans vs. Soul Reapers. I love me some awesome fighting in my anime, but this is getting to be a bit much. If I hear the word "bankai" one more time I think I will scream. It took about 50 Eps before it was mentioned (this is the second, higher incarnation of a Soul Reapers sword), and now everyone is just crazy about bankai.

The thing is, I love Ichigo because he is different. I want him to be the great undiscovered, misplaced and superpowerful Soul Reaper, and I also like to see him struggle. It's not nearly as interesting when everyone around him is nearly as powerful, except maybe for Itsuda, who is powerful in a completely different not Soul Reaper kind of a way.

So in order to understand this post, you will probably have had to have seen a little bit of Bleach. I'll likely write some more detailed stuff later.
Posted by William Shakespeare