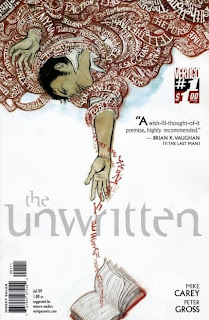 For shame, Shakespeare! You don't write for a month and then you choose an American comic to profile on your site?

Yes, yup, indeed! Why? Because I hold the keys to the squee. Also, because Unwritten by Mike Carey and Peter Gross is a geek's delight, much in the same vein as Sugar Hill Gang's Rapper's Delight:

Actually, it's not. It doesn't have anything to do with rap, at all.

What Unwritten has more to do with is literary history, heroes and words. The main character, Tom Taylor was the inspiration for his father's popular fantasy novels about a young wizardy type boy and his two magical friends, a dufus of a boy and a smart girl... Sound familiar? Sure. In the world of Unwritten Tommy Taylor is considered greater than Harry Potter. And, the series author has mysteriously disappeared, so a cult following has grown around the man Tom Taylor, who ends up making his bread and butter attending comicons and signing memorabilia.

Our story begins when the news breaks that Tom Taylor isn't, well, Tommy Taylor. He may have been stolen as a baby or bought or something, but he is not the real, biological son of Wilson Taylor and boy, do folks feel duped!

Tom becomes the target of an assassination plot. He is then kidnapped by a fan gone too far and nearly killed when a mysterious lady shows up to save him. Determined to find out his own true identity, Tom and the mystery lady end up at the castle where his not-father, Wilson Taylor, wrote his famous novels and where Mary Shelly happened to pen Frankenstein, and where a group of horror writers are having a convention, which is also being attended by a by a knife wielding bad guy who seems to have strange power based on words and language.

This first installment of Unwritten is somewhat reminiscent of other comics based in and around already written stories. I'm thinking Fables or even The League of Extraordinary Gentlemen. I know, I won't step too far into that territory. I don't feel like I'm worthy to talk about Alan Moore. Maybe one day...

Why should you read this? It's literary, so naturally, it's good for you! 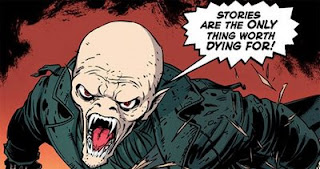