The Pushman and Other Stories - Yoshihiro Tatsumi 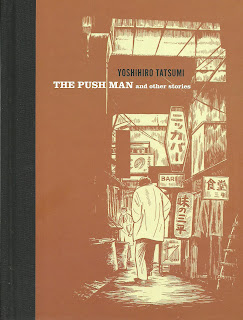 If you've ever been to a manga store or even a comics shop, you've probably seen Yoshihiro Tatsumi's comic A Drifting Life. The volume is huge and the cover has an image of a manga artist bent over and drawing. That book, an autobiographical exploration of the artist's life, was drawn over a decade and is considered a classic, which is probably why it is so ubiquitous.

I have never read it.

I've always wanted to, but I always encounter the book most inconvienantly, normally when I'm on foot and already have way too much in my backpack. I usually give the book a once over, wish I owned it, and move on. Still, I've always been curious about Tatsumi. His art is simple, not your typical manga, which I've been steering away from lately anyhow. When I had the opportunity to pick up The Pushman and Other Stories republished by Drawn and Quarterly, I did so without hesitation.

This book isn't for everyone, but it is for me. It's dark. It's sick. It's slightly absurdest. Think Kafka meets Lars von Trier and Patricia Highsmith for tea and some pen and ink drawings.

For example, "The Pushman," the title story of the collection, is a short piece about a man who has the job of pushing commuters onto trains in order to pack them as full as possible. Anyone who has ever ridden a full commuter train or bus can testify to the anxiety, however short lived, induced in such a situation.

In "The Pushman," this feeling is pervasive. At one point, the pushman helps a woman who tears her blouse in the commute frenzy. They go on a date and sleep together. Later, she introduces the Pushman to her girlfriends, who rip and tear at him in a sexual frenzy reminiscent of the heated, tight, urgent commute.

Later, the Pushman finds himself pushed onto one of the trains by accident. Squashed between squirming human bodies, he proclaims, "I'm a Pushman."

I read this story on BART. It gave me the hee bee jee bees.

I think these stories are brilliant. You will not, however, if you can't handle sex, violence, human failings or aborted babies. Consider carefully before reading.
Posted by William Shakespeare