“Once upon a time, in a land far away lived a nameless monster. He was dying for a name.” 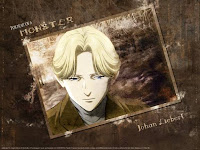 Monster is a long running anime based on the graphic novels of Naoiki Urusawa. This extremely elaborate drama/thriller is set in Germany and the former republic of Czecheslovakia. It’s part fairy-tale (ala Grimm Brothers rather than Disney) and part gritty crime story. The story follows Dr. Tenma, a brilliant neural surgeon mistakenly framed for multiple murders after saving the life of a young boy, Johan Liebert. Johan, and his twin sister Anna, are the only survivors of the violent murder of their adopted parents. From the first episode viewers realize that there is something inhuman about the young boy, despite his charisma. Tenma, falsely accused and on the run from several groups of people interested in catching him, takes to the road to both clear his name, and discover the truth. (Image by Angel Zakuro.)

What follows is a complex, multi-character story which spans decades. A large part of the series deals with the internal battles each character faces regarding regret, responsibility and redemption. Later discussions of belief and faith in oneself are complex and interesting. Identity is a central issue as well. Johan, with his incredible ability to influence others, is a compelling villain with charm and beauty. He becomes symbolic of the darkness possible in each person, and is molded by the Eastern Bloc Government from youth to be a perfect leader and brilliant strategist. His sister Anna and Dr. Tenma, are his counter, and embody love and forgiveness.

It really is a fantastically complex (albeit sometimes slow-moving) anime. But, I’m still wondering WHY this is animated. The animation is beautiful, and the architecture and scenery is amazingly rendered, but there isn’t any apparent reason why this story needs to take anime form, or graphic novel form. There are no special effects, transformations or dream sequences…nothing that couldn’t be done live-action at all. Despite the strange decision to animate at all, this is a really complex and intelligent series. I am awaiting the next season and the conclusion to this epic.
Posted by Amanderpanderer